Tohoku University President Susumu Satomi was in the Chinese city of Changchun recently to attend the 70th anniversary celebrations of Jilin University on September 16.

In his congratulatory message, President Satomi spoke of the strong relationship between the two universities and his hope for futher bi-lateral collaboration. He also made a presentation on Tohoku University's global strategy, which includes plans to improve student and faculty mobility.

As part of the celebrations, a JLU Family Day was held, which President Satomi attended. He shared a video of Tohoku University with other participants, answered questions on campus life and engaged with Chinese students interested in coming to Sendai.

Tohoku University and Jilin University have been university-level Academic Exchange Agreement partners since 2001. 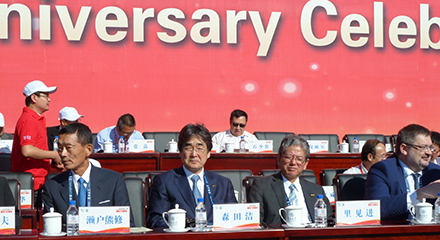 At the 70th Anniversary Celebration