For two days of summer last year, students from Tohoku and Harvard universities united on a study tour of Fukushima prefecture. They went to learn about decontamination efforts, the impact on local farming, and recovery in the wake of the 2011 Tohoku earthquake and nuclear disaster. Although the tour was aimed at promoting international fellowship between students, the reach was far wider as students had the chance to connect with local communities in Fukushima, and hear from the villagers first hand.

Throughout the tour of Iwaki city, Iitate and Kawauchi villages, students visited an experimental farming station, a seaside village and Daini nuclear power plant -- not to be confused with Daiichi power plant, where the nuclear accident took place.

Entering a zone that has been designated a 'restricted living area' is not without its concerns, and 3rd year medical student Tatsuhiko Hosaka was on hand to answer questions about potential health risks. There were none. He estimated that exposure to radiation would be lower than 0.192 mSvm after 48 hours, less than the amount received from a mammogram.

The Tohoku University PR team joined the group for day one of the study tour. 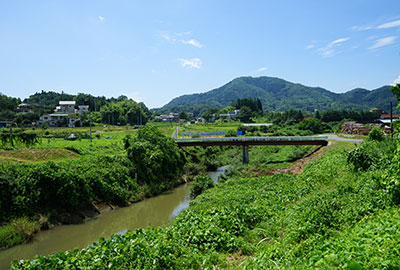 A gathering of friends

We wait at Fukushima Station to collect Harvard University students, before heading to Iitate village. Although it's the first time for most of the students to meet, they greet one another like old friends. Coincidentally, a student from Tohoku University who studied in Singapore, sits next to a Singaporean PhD student from Harvard.

From the Harvard side are six students with nationalities ranging from America, Chile, Singapore and Albania, to Japan. The group from Tohoku includes five students from Fukushima, and international students from Holland and China.

On our way to Iitate village, we drive through residential areas in Watari district where large blue bags of contaminated waste line the streets. When we pass a field full of blooming lotus flowers, we are told that this is one of the many fields that are no longer allowed to be used for farming. In despair, the farmer has planted lotus flowers to console himself.

A farm transformed into a research laboratory

We arrive at the house of Muneo Kanno. The house, which he once lived in but now commutes to daily because of evacuation orders, is an unusual sight. Scientific equipment is scattered around the farmhouse, and ominous metal boxes stand their ground in the hot summer sun.

Kanno is the head of the local agricultural committee. He has been working to rehabilitate the farming community with scientists from an NPO, carrying out a range of scientific experiments. They are trying to reduce or remove radioactive material in local agricultural products.

Yoichi Tao, head of the NPO called 'Resurrection of Fukushima', takes us into the barn and shows us samples of rice that they've been growing under experiment. Rice planting is prohibited in this area, but this exercise has been cleared under an agricultural research agreement. They have a method for soil analysis, and have been experimenting with decontamination, where a top layer of soil is removed and buried.

With the absence of people living in the region permanently, the area once used for farming rice and cattle has seen an increase in monkeys and wild boar. This ruins the land for farming, and damages any decontamination work that has been done. To prevent this, boars are culled, and Mr Tao shows us samples of flesh which are measured for radioactive poisoning. 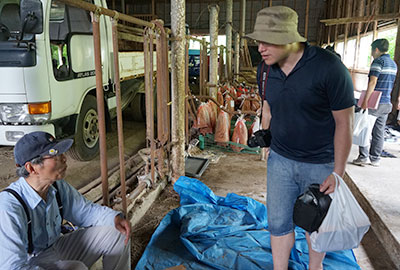 Postdoctoral fellow at Harvard University, Nicolas Sternsdorff, talks to a scientist from 'Resurrection of Fukushima' about their experiments.

Outside the barn there is equipment that measures the radioactivity of aerosol in the air. NPO scientists have also been working with villagers, teaching them how to make precise contamination dose rate maps. This kind of activity is essential for empowering locals so that they can take control of their own information.

Kanno tells the students of his frustration at having been forced to evacuate, and there is barely a dry eye in the house. He says he decided to restart farming when he saw his father, also a farmer, getting depressed. "Watching things grow is a farmer's livelihood" he says, "Without this, we lose our meaning in life". 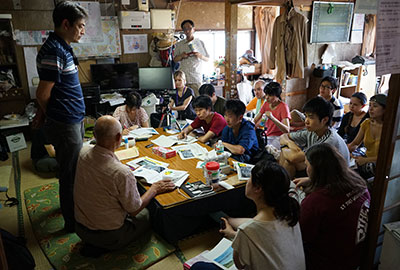 Mr. Kanno talks to the students

According to a 2013 health risk assessment from the World Health Organization, the psychological impact of the Fukushima accident is predicted to outweigh other health consequences. In Iitate village, evidence of this abounds. But Kanno is remarkably optimistic as he says that he is grateful for many of the things that the disaster has brought, including a mega solar project that is set to be built in Iitate to generate eco-friendly energy.

As we board the bus for our next destination, Mr Kanno gets on one microphone and the other is taken by Associate Professor Motokazu Matsutani who has been translating throughout the day. Matsutani is the principal motivator behind the tour and his connections to the group run deep. Not only is Harvard University his alma mater, but he is also Fukushima born and bred.

For Matsutani and the students from Fukushima also on the tour, this is an opportunity to bring attention to the plight of their wider community. One cannot help but to feel sympathy as we pass through the verdant countryside. Fukushima is undeniably pretty.

We drive through ghost towns, where everything seems to have stopped in time. There is an architecturally designed school, but no school children. We are told that some children, who took refuge with their families, commute for over an hour to attend school in temporary buildings with their old classmates.

Decontamination efforts are in full swing and as we drive further, the stacked up bags of soil become larger and the rows denser. The problem with decontamination is what to do with the soil long term. Moving the soil from a field semi fixes one problem -- except it's often replaced with less fertile soil -- but then there's the question of whether simply relocating it is effective. 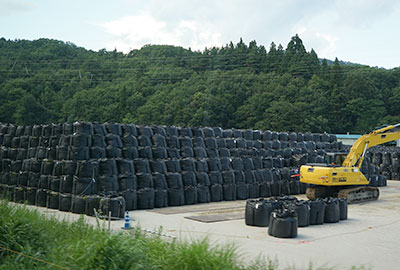 Decontaminated waste is stacked in fields

To clean one household it is estimated to cost between four and ten million yen. That's around thirty to forty thousand US dollars. Moreover, a massive amount of storage space is needed to contain all the waste. The information is almost overwhelming. But remarkably, the will to overcome these problems is strong.

This is possibly what surprises the students the most. "There are a lot of problems related to the nuclear accident, but there are also people who don't give up trying to solve them" says 4th year Economics and Management student Narumi Sanpei. She is also from Fukushima and says it's imperative to know what's happening in the region now, to help shape future decisions.

Both Tao and Kanno emphasize that wherever nuclear energy exists, so does the issue of problem solving if something goes wrong. Just as they are drawing on data and experiences from the Chernobyl disaster, they hope to provide some insight into recovery for others around the world.

Kanno says that at dusk it gets dark quickly because there are no people and no lights. There is however, one farmhouse that is abuzz throughout the day, and he welcomes people from far and wide to come and visit his hive of activity.