Nobel Laureate Peter Grünberg has been appointed a Distinguished Invited University Professor at the Institute for Materials Research at a ceremony on May 2. Professor Grünberg is the first to take up the position since the Specially Invited Professor system was set up in March 2015.

Prof. Grünberg was awarded the Nobel Prize in physics in 2007 for his discovery of giant magnetoresistance, which brought about a breakthrough in gigabyte hard disk drives. He is widely known as an authority in the field of magnetism in metallic superlattices.

The Specially Invited Professor system was initiated to facilitate the short term residency of a limited number of distinguished scholars whose expertise coincides with the educational research at their institute of residence.

While at Tohoku University, Prof. Grunberg is expected to give educational seminars, provide guidance to young researchers and exchange ideas with academics in related fields. 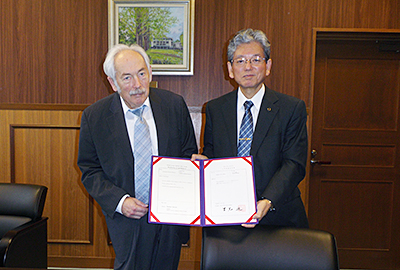