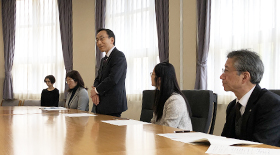 In his congratulatory speech, President Ohno spoke of the university's goal to have women make up 19 percent (up from the current 16 percent) of the faculty by 2021. "As the university that accepted Japan's first female university students back in 1913, we have a mission to work towards greater gender balance and diversity," he said. "I believe that in order to pursue the highest standards of education and research, the world's best universities need to have that balance."

The Murasaki Sendai Hagi Award is given every year to outstanding female researchers who best represent Tohoku University's research institutes. It is a recognition of the research work, as well as the researchers' contributions towards mentorship, promoting diversity and gender equality.

"In Japan, and in our university, female researchers are still under-represented. It is therefore important to have talented women in various research fields as role models, to show young girls that it can be done," said Noriko Osumi, director of the Tohoku University Center for Gender Equality Promotion (TUMUG).

One winner is chosen from each of the following fields: humanities and social sciences; science and engineering; agriculture and life sciences; and dentistry, pharmacy and health. Winners receive a certificate of commendation and a 250,000 yen prize for research expenses. 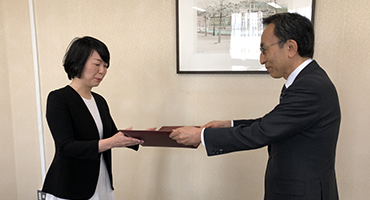 "I'm greatly honoured to get this award," said Sekiguchi, who works at the Department of Physics. "There aren't many young girls who choose to study physics, so it's an opportunity for me to talk about my work and share my interest. It's also nice to meet other female scientists."

"Even in fields where there is a relatively large number of female researchers, there are very few women in the higher positions," said Kikkawa, who works at the Department of Developmental Neuroscience. "I think many women in Japan tend to be reserved and not show off their personalities even though they are extremely capable. That's why an award like this is so important in raising the profiles of women and their work."

The Murasaki Sendai Hagi Award was established in 2017, and many of the 12 women who have received the award have gone on to successful careers. Last year, 2017 recipient Rie Umetsu won the prestigious Saruhashi Award, and is now the first female to be named a full professor at Tohoku University's Institute for Materials Research.