Forum on Large-scale Cohort Studies and Expanding their Potential

These studies play an increasingly important role in biomedical research, as they provide a better understanding of how genes, lifestyle and the environment relate to diseases, and contribute to the discovery and development of drugs, and even the potential for personalized medicine.

Over three panel sessions, participants from both biobanks discussed achievements and trends in their recent studies and exchanged information on strategies and best practices. 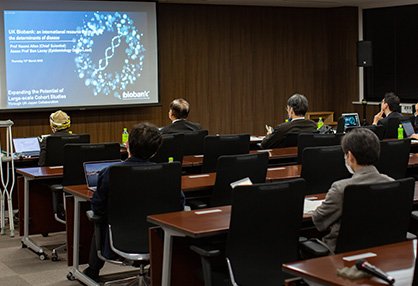 Session One offered an overview of ToMMo and UK Biobank, their background and the work that they are currently involved in.

Initiated some 20 years ago, UK Biobank is a large-scale, biomedical database containing in-depth genetic and health data from half a million participants. Chief Scientist Naomi Allen described it as "an international resource for studying the determinants of disease," as the data is available to all researchers, not just from academia, but also industry.

Tohoku University Professor Shinichi Kuriyama then outlined the two prospective cohort studies being conducted by the Tohoku Medical Megabank Project. One is a Community-Based Cohort Study with 80,000 participants, and the other, a world-first "Birth and Three-Generation Cohort Study involving 70,000 people from 20,000 families.

"If environmental factors in utero and family genetic and environmental information can be investigated together, 30 years of follow-up would produce a pseudo lifetime cohort, and life-course epidemiology can be realized," said Kuriyama. "Recent advances in genomic medicine have revealed the need for more family participation, so we plan to recruit additional participants, mainly focusing on missing family members."

Session Two looked at the genomics and omics research. Deputy CEO of UK Biobank Mark Effingham spoke of the efforts to add genetic characterization to their resource, and the importance of having an open access policy.

"What we saw with the release of the genotyping data was visibility growing on an international stage through conferences," he said. "We now have 30,000 researchers in more than 90 countries worldwide registered to use the resource." He added that the biobank's open-access policy has also allowed innovative and groundbreaking consortia to come together.

Tohoku University's Kengo Kinoshita then spoke of ToMMo's goal to analyze genome and omics data for personalized medicine and healthcare. 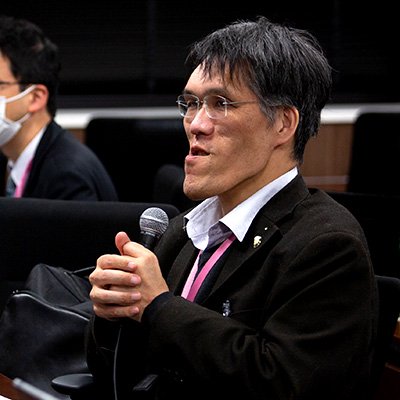 He described their work of rebuilding community medicine on the Pacific coast by rotating young doctors between areas affected by the 2011 tsunami and university laboratories; and by surveying the health status of those living in the affected areas through the two types of cohort studies.

He also introduced the work of the Advanced Research Center for Innovations in Next-Generation Medicine (INGEM), which aims to deliver personalized medicine to Japanese cancer patients through Tohoku University Hospital within the next few years. "For that purpose, we will establish a new Japanese reference genome that can be used for exome analyses by the end of this year."

He added that the longer term mission would be to "establish personalized healthcare and medicine for the wider Japanese and East Asian populations."

Looking to the future in Session Three, Allen said that UK Biobank hopes to do more detailed research into the social sciences, such as studying the association between social economic deprivation, social isolation and exigent diseases, as well as environmental health research.

For ToMMo, its focus remains supporting the long-term health survey of the population affected by the 2011 Great East Japan Earthquake and Tsunami, and providing a research infrastructure for the development of personalized genomic medicine.

But going forward, Yoko Izumi, Sector Director of ToMMo's Integrated Biobank, says finding ways to effectively collect information from hospitals has become imperative, especially since Japan does not have a centralized system like the NHS in the UK. In addition, ToMMo hopes to construct detailed phenotype data and organize complex data in a more accessible way, to improve the user experience.

At the end of the four-hour forum, Sir Rory Collins, speaking on behalf of the UK Biobank, called the cooperation between the two biobanks "the start of a beautiful friendship." While ToMMo Executive Director Masayuki Yamamoto extended an invitation to members of UK Biobank to visit Sendai.