Graduation Day: Congratulations to the Class of 2021

With optimism earlier this year, Tohoku University planned a simple commencement ceremony at Kamei Arena Sendai, with none of the usual pomp or guests, but with the participation of all 4,665 students that make up the 2021 graduating class.

But a sudden rise in COVID-19 cases in Miyagi prefecture prompted a state of emergency to be declared on March 18, and Tohoku University made the decision to pare down the ceremony even further, restricting attendance to a handful of award recipients and student representatives.

The resulting 45-minute ceremony, held on March 25, was short but moving, and was streamed live online for all who could not attend.

In his speech, President Ohno congratulated the 2,361 undergraduates and 2,304 graduate students for successfully completing their studies, despite the challenges caused by the COVID-19 pandemic this past year.

He shared the anecdote that Isaac Newton too, had had his university studies disrupted when the plague swept across England in 1665. While isolating, Newton still managed to make great strides in his research, creating the basis for calculus, theorized on optics and obtained an understanding of gravity.

"In this way," said President Ohno, "social distancing can also be a time for us to deepen our thinking." 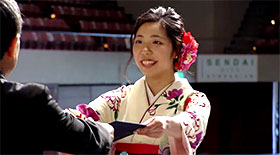 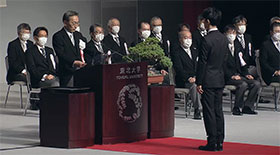 The president then encouraged the students to join the university's global alumni network, in order to "stay connected with friends and professors, keep in touch with developments on campus, and help each other in difficult times, as members of the Tohoku University family."

Valedictorian Sota Haga, from the School of Law, gave a speech on behalf of the undergraduates, thanking everyone for their support. 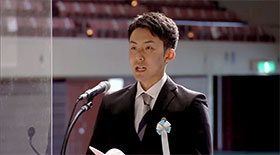 "We were able to learn and grow at this university because of the faculty and staff who gave us daily guidance and encouragement, the friends we studied with, the seniors we respected, the juniors who looked up to us, the people in the community who watched over us, and of course, our families," he said.

He added, in English, that "from now, we will each go our separate ways, but I believe that we are strongly bound by one mind, and that is to create a better society." 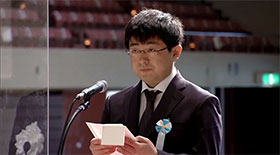 Masaki Kumondai from the Graduate School of Pharmaceutical Sciences, spoke on behalf of the graduate students, and began with a memory of another ceremony affected by extraordinary circumstances. "Looking back, my life at Tohoku University started 10 years ago, but the entrance ceremony was cancelled due to the Great East Japan Earthquake. I vividly recall that I had great anxiety as well as expectations."

Kumondai spoke of the valuable opportunities he had at Tohoku University, especially the chance to engage in international collaborative research with the Karolinska Institutet in Sweden and the National Cancer Center in Spain. He said that he and his fellow graduates understand the responsibility of following in the footsteps of the university's alumni, who "led the way in creativity and innovation and who continue to play an active role in making the world a better place."

The rest of the graduating class, who were not at the ceremony, spent the day visting their departments, saying their goodbyes and taking photos on campus.

The Public Relations Department joins the president and the entire Tohoku University family in saying congratulations and good luck to the graduating class of 2021.