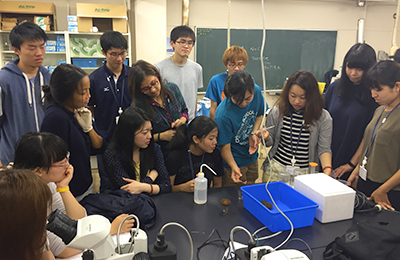 Seventeen Japanese and 12 international students from Tohoku University and the University of Tokyo participated in the course, which also featured a unique learning and social experience in the camp-like environment of Asamushi, on the coast of Mutsu Bay in Aomori prefecture.

The course ended back in Sendai on September 2 with the students presenting the results of their experiments before a closing ceremony on Kawauchi campus.

This new course was organized through a collaboration between Professors Martin Robert from the Institute for Excellence in Higher Education (IEHE), Gaku Kumano and Ayaki Nakamoto from the Asamushi Center, Ian Gleadall from the Graduate School of Agriculture and Yasuyuki Matsuda from the University of Tokyo. It was supported by an IEHE educational development grant.