The Mayor of Lyon Gerard Collomb was in Japan recently to receive the Order of the Rising Sun. He was awarded the gold and silver star by the government for his contributions towards Franco-Japanese relations.

While in Japan, he led a French delegation on a detour to Sendai on May 24, to learn more about the collaborative projects between Tohoku University, CNRS and Université de Lyon, whose entities include INSA Lyon and École Centrale de Lyon. 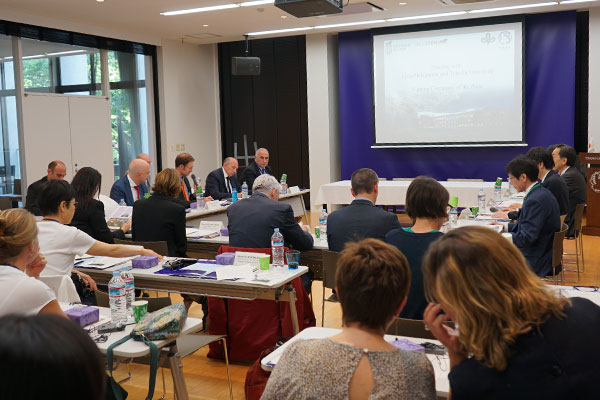 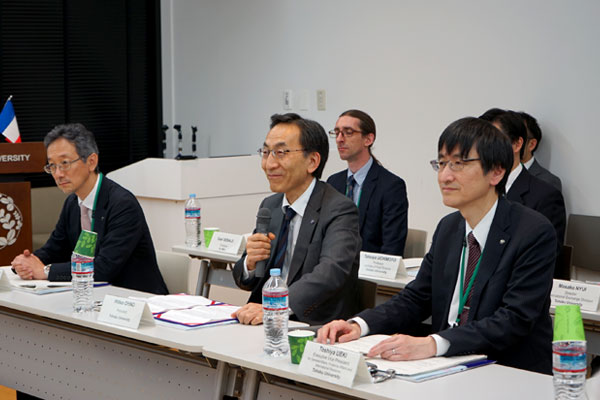 Academic collaborations between Tohoku University and Lyon date back almost a quarter of a century, with liaison offices set up in 2004. 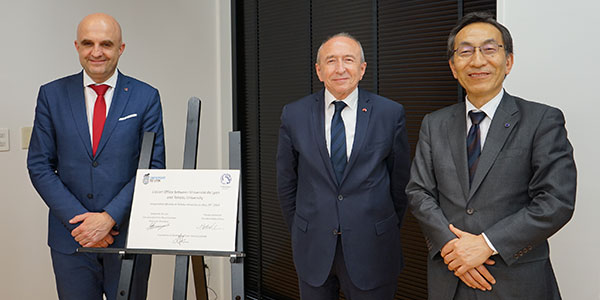 The strong relationship between the two university's is also currently reflected in the ELyTMaX laboratory at the Material Solutions Center (MaSC). ELyTMaX stands for Engineering Science Lyon-Tohoku for Materials and Systems under Extreme Conditions. It's an international joint unit between Tohoku University, CNRS and Université de Lyon, set up in 2016 to study the behavior of materials and systems, to better understand their reaction to complex environment or excitation.

The success of ELyTMaX Sendai led to the opening of ELyTMaX Lyon last year in France. Both labs feature a mix of students predominantly from Tohoku University, INSA Lyon and ECL. 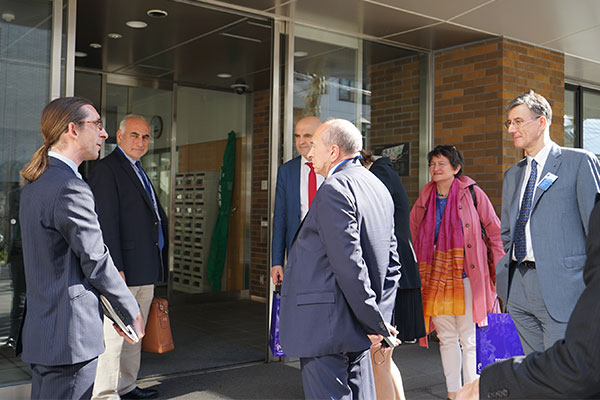 "Researchers from Japan and France have gathered at these labs for a common purpose of doing research together," said President Ohno. "Université de Lyon and Tohoku University have achieved great strides by making the most of our mutual strengths."

"We recognize that our student and researcher exchanges have been most effective," said Mayor Collomb, echoing the sentiment. "Collaboration between universities is important in our quest to develop wide-ranging innovation through the combination of different kinds of knowledge." 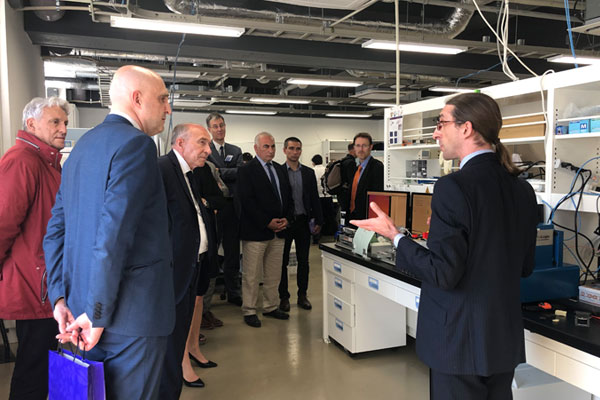 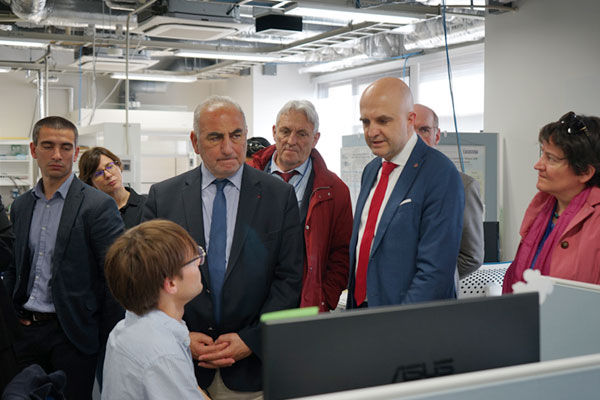 Professor Gael Sebald briefly introduced ELyTMaX's activities, and the delegation had a chance to meet the French researchers and double-degree students involved in joint research here.

They also had a look at the equipment at MaSC that is used by ELyTMaX researchers for material microstructure analysis. 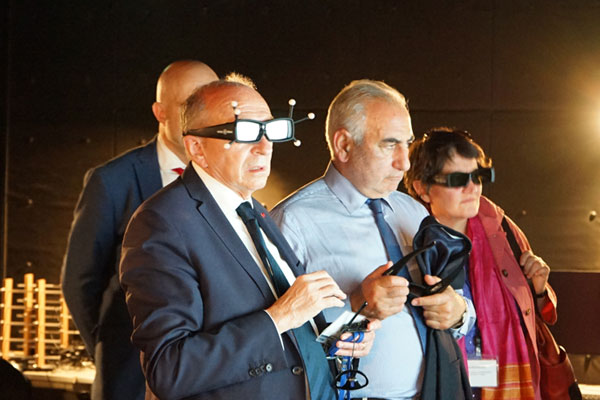 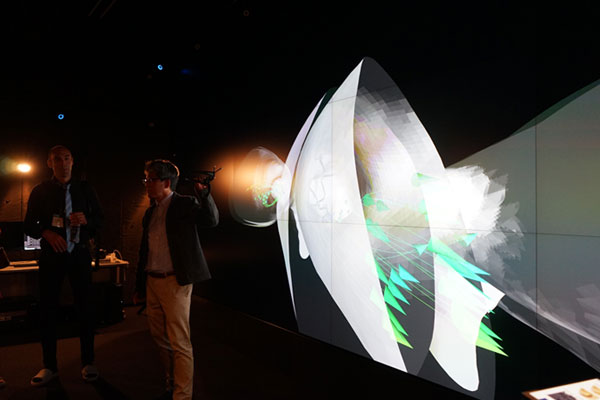 The delegation then visited the Realization Workspace at the Institute of Fluid Science, where they watched a demonstration of the 3D visualization system using virtual reality techniques and a large screen composed of 12 tiled 70-inch displays.

They were given two demonstrations - intracranial stent for cerebral aneurysm as a flow diverter, and prediction of turbulence at Shonai airport. 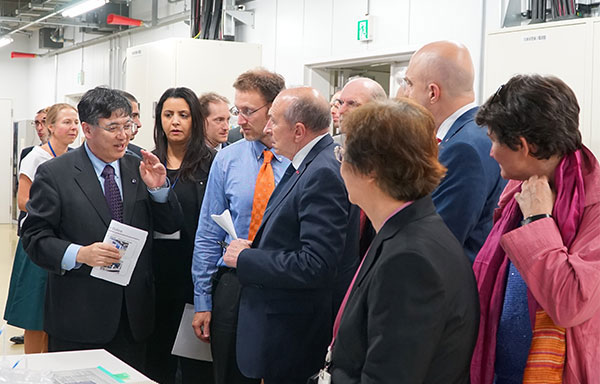 Before leaving Sendai, the delegation stopped by the Tohoku Medical Megabank Organisation (ToMMo) at Seiryo campus. They were given a brief introduction of the facility by ToMMo Executive Director Masayuki Yamamoto and a tour of the Sendai Community Support Centre and the biobank.

Aside from their time on campus, Mayor Collomb and the delegation met with Miyagi vice governor Shinya Endo and other officials about business and academic-industry opportunities. "In Lyon, we are working on industry-government-academia collaboration," Mayor Collomb said, "and I think we need to promote exchanges in different capacities, for example, having universities and businesses working closely together." 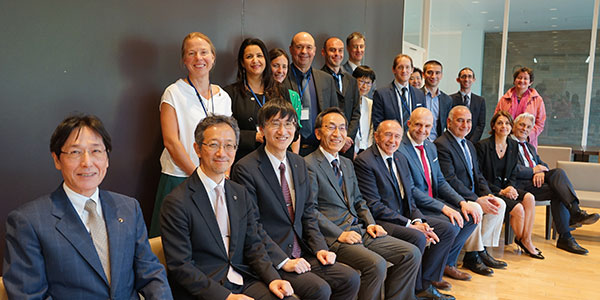