Run by the Graduate School of Life Sciences, the course featured an introduction to marine biology, as well as advanced workshops on meiobenthology, the developmental biology of ascidians, as well as the cell biology of sea urchin embryos.

There was also a keynote lecture by Dr. Motonori Hoshi of the Tokyo Institute of Technology, titled "Marine Biological Stations: Yesterday, Today and Tomorrow."

Away from the labs, the participants enjoyed Asamushi's natural beauty and scenic view of Mutsu-bay. There were also field trips to Hirosaki Castle and Hirosaki Apple Park. Aomori prefecture is the largest producer of apples in Japan.

The annual international marine biology course is named after Shinkishi Hatai, the first director of Tohoku University's Asamushi Marine Biological Station, and the founder of the Palau Tropical Marine Biological laboratory. The course aims to nurture future biologists by instilling in them a strong sense of leadership and a global outlook - traits that Dr. Hatai was famous for.

In that spirit, the course is always a truly international gathering. This year, there were 11 students from Europe, Southeast Asia and Japan. And the five instructors brought expertise from countries as diverse as the United States, France, Denmark and Japan. 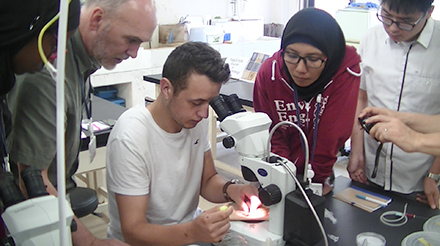