Tohoku University President Hideo Ohno has been awarded an honorary doctorate by the Université de Lorraine in France. 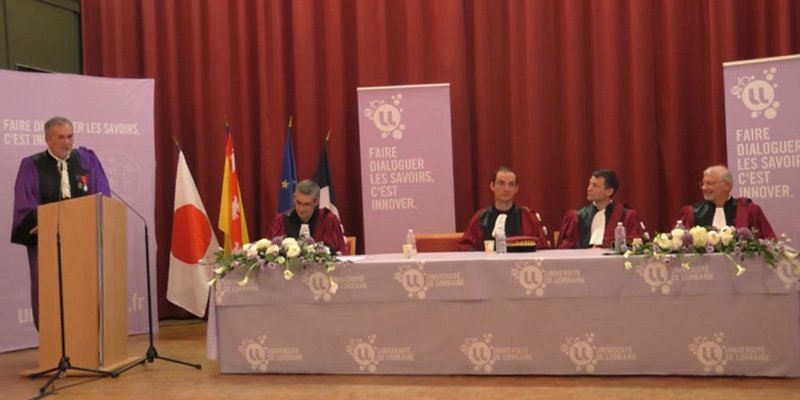 The ceremony to confer the title of "Docteur Honoris Causa" was held online on May 20, and led by Université de Lorraine President Pierre Mutzenhardt, who said the title "recognizes not only the scientist but also the leader, one who gives impetus to the world's university community."

Université de Lorraine professor Stéphane Mangin, who referred President Ohno for the award, spoke of their long friendship and professional partnership. He shared anecdotes of President Ohno's first visit to Nancy in 2006 - at his invitation - to speak at the fledgling International Workshop on Spin Transfer.

"I remember some of us said 'do you really think Professor Ohno is going to come to Nancy?' But you came and you gave the very first speech of the conference. The fact that you accepted to come to the conference led to many other people coming, and it gave us the strength to continuing holding this conference year after year."

Mangin added that their research teams have continued to work closely together over the years, exchanging ideas and samples, as well as students and postdocs. "Thank you very much for sharing your knowledge and your passion with us. Thank you for strengthening collaboration in our extended fields, for helping us to develop our human resources and young talent. And thank you very much for your friendship." 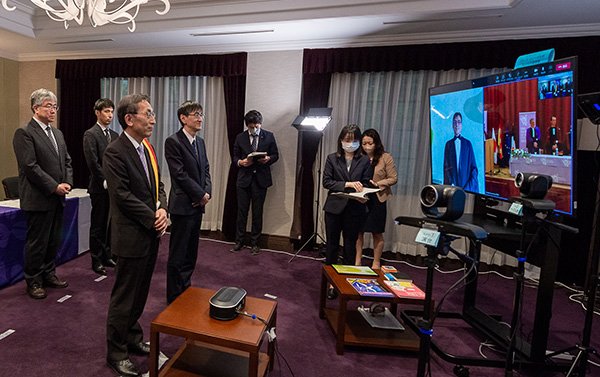 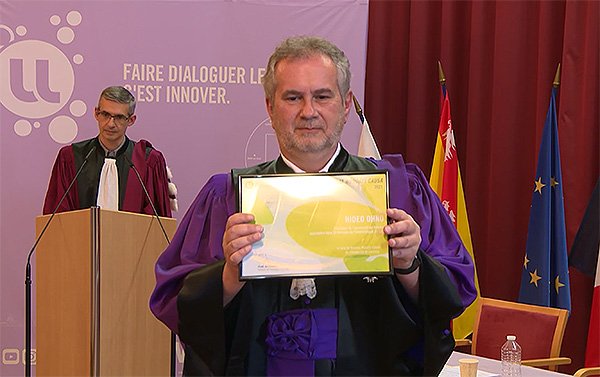 In the main part of the ceremony, President Ohno was given an epitoge and diploma, as well as several gifts, including a crystal leatherback turtle that President Mutzenhardt explained, is made with materials mined by a startup from the university.

In his speech, President Ohno thanked the Université de Lorraine for the honour, as well as several personal mentors, family and friends who have "helped to shape my research career and my life."

He then spoke of the strong partnership between the two universities. 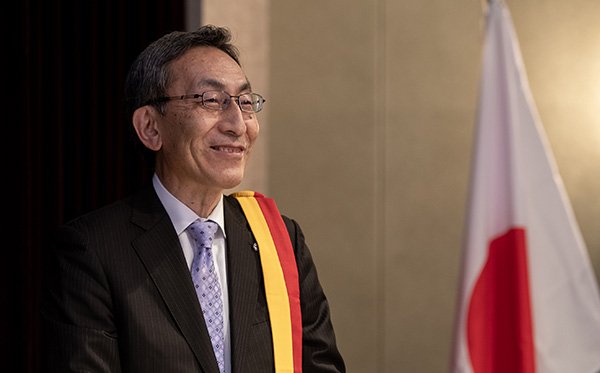 "Albert Einstein, who visited Tohoku University in 1922, said that 'Imagination is more important than knowledge. Knowledge is limited, imagination encircles the world.' Every researcher knows that it is this imagination that leads to the best innovation.

"For the better part of the past decade, Tohoku University and the Université de Lorraine have put our imaginations together to collaborate in many fields - in spintronics and mathematics, and then in materials science, engineering, robotics, health and the humanities. We established a collaborative research fund program in 2020, and I am confident that we will continue to build on the foundations that we have laid together."

He then gave a short lecture introducing his recent work in magnetic tunnel junction, "a spintronics nonvolatile memory device that allows us to save a lot of energy in integrated circuits and microelectronics."

The hour-long ceremony ended with a congratulatory toast and a promise by both sides to meet up again soon in person.