Symposium: Towards an Engaged University Through Diversity, Equity and Inclusion

Since its founding in 1907, Tohoku University has strongly advocated an "open door" policy of accepting students and faculty from a wide variety of backgrounds. Notably, in 1913, it was the first university in Japan to admit female students.

In efforts to further promote gender equality and diversity, and to reduce the gender gap on campus, the Tohoku University Diversity, Equity and Inclusion (DEI) Promotion Declaration was released on April 5.

In conjunction with the university's 115th anniversary, a special symposium titled "Towards an Engaged University Through Diversity, Equity and Inclusion" was held on June 20, with experts in the field sharing their experiences and best practices. 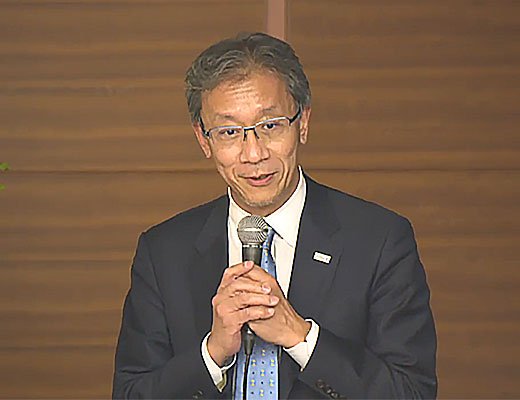 First among the three keynote speakers was University of Tokyo President Teruo Fujii. He stressed the importance of diversity if universities are to fulfil their role of nurturing students into leaders who can contribute to solving social problems. "We have to listen to voices that are not heard. If we are too homogeneous, we will not be able to reach higher level ideas or empathetic solutions."

He added that the University of Tokyo has implemented several initiatives such as education programmes on diversity and inclusion for undergraduates, and "safe spaces" on campus "where diverse students can feel a sense of belonging and security."

In her speech, Gaye Rowley of Waseda University described "living diversity" as a call for both institutional and personal change. "Both of those require concerted effort, expenditure, and perhaps even sacrifice."

Sharing professional and personal anecdotes, Rowley spoke of the efforts at Waseda to ensure that non-Japanese speakers can participate in the democratic governance of the university; and the benefits of programmes - such as the one at Cambridge University - that widen access to elite education.

She also said that student-led initiatives at Waseda suggest that many of today's youth are already aware of the concepts of diversity and inclusion, and perhaps what they need most is appropriate support. "Our students are showing us where we need to go. They are already activists, comfortable with diversity, living diversity. It is us, their teachers, who still have a lot to learn." 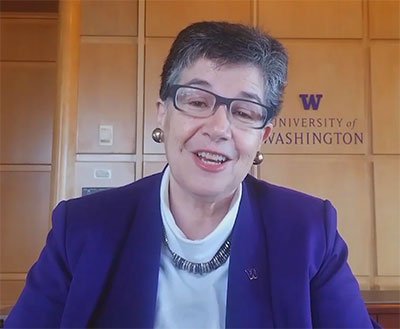 University of Washington President Ana Mari Cauce delivered her keynote message via video, in which she said that "diversity, equity and inclusion are absolute requirements to being a globally engaged and first class university."

Diversity isn't just about doing good, she said, it's about being good. "When there are men and women at the table together, when there are diverse races at the table, everyone can come at things from different perspectives and push each other. Yes, sometimes it can be uncomfortable, but at the end, our solutions are better, and we have a better understanding of the problem." 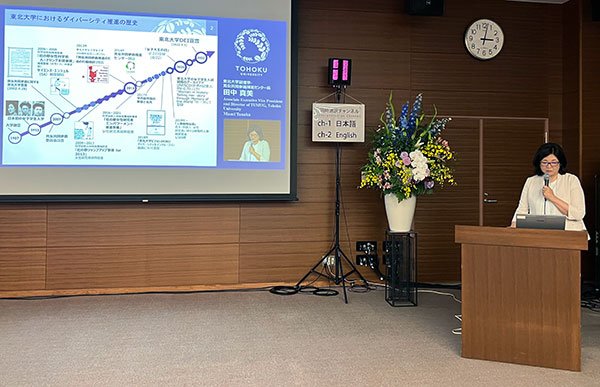 The second half of the symposium focused on the status of diversity, equity and inclusion at Tohoku University.

Professor Mami Tanaka, Director of the Centre for Gender Equality Promotion (TUMUG) outlined some of the initiatives introduced since the Gender Equality Committee was established in 2001. These include the opening of nursery schools on campus, and the awarding of the Sawayanagi Prize, which encourages research related to gender equality.

In partnership with the committee, TUMUG provides female researchers with myriad support to help achieve work-life balance; and runs the Science Ambassadors programme, where young female researchers engage in community outreach and serve as role models for school-age children who are interested in science.

AROW, a Tohoku University circle for issues of sexuality, shared the results of their survey and offered a list of recommendations from the students' perspective. These recommendations include improving toilets and changing rooms, removing the gender field on forms, having more awareness activities and trusted counsellors who can offer advice.

The symposium attracted an estimated total of 400 people onsite and online. Simultaneous English-Japanese translation was provided for all lectures, and the communication support application UD Talk was used to help participants with hearing disabilities.