Times Higher Education held their annual Asia Universities Summit from June 3 - 5. This year's event, which was entirely online, focused on the achievements of research institutions in Asia, and the strategies that have enabled them to remain resilient while contributing to the fight against the COVID-19 pandemic.

"It's never been more clear how much universities are an extraordinary force for good in the world," said Phil Baty, THE's chief knowledge officer, in his welcome address.

The summit featured a series of academic and industry-led keynote lectures, diverse panel discussions and workshops. Discussion sessions were held over three days, on topics ranging from the role of universities in nurturing creativity in Asia, supporting the United Nations Sustainable Development Goals, achieving gender equality and the challenges of changing demographics. 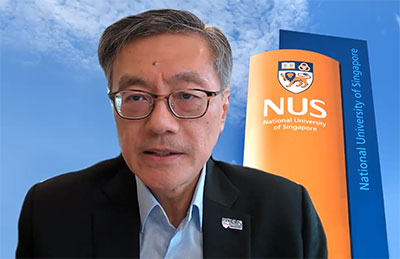 In his keynote lecture to open the summit, National University of Singapore President Tan Eng Chye spoke of the need for a "full transformation" of traditional frameworks and models, in order to better prepare students for an increasingly complex and uncertain future.

He described how NUS is building a "spirit of lifelong learning," where students take modular degree and non-degree courses in close alignment with industry needs. "Careers are now 40 to 50 years in an era of increased disruption. Four years of undergraduate education is insufficient."

For universities to pivot to lifelong education, he said, industry relevance, new modes of training and easy entry-and-exit points for continuing adult training are critical factors. Interdisciplinary teaching and learning are also important, as modern challenges are often complex. "Learning is no longer a fixed trajectory," he said. "And as a university, we can now help to develop learners with a wide array of perspectives and skill sets which will be critical to solving the challenges of our common future."

On the topic of engendering a cultural environment that supports world-class research, President Ohno spoke about encouraging and facilitating interdisciplinary collaboration. He gave the example of how the different departments of Tohoku University came together with a common purpose in the aftermath of the Great East Japan Earthquake and Tsunami in 2011. 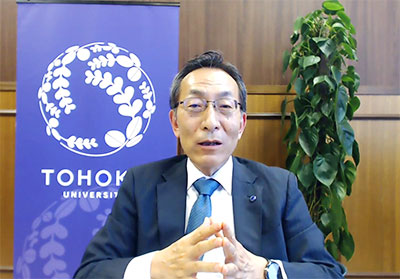 "We lost more than 20,000 people in the Tohoku region, and naturally, all the members of our university wanted to help the communities, particularly those near the pacific coastline where the tsunami hit. In order to do so, we had to get out of our specialties and collaborate with each other, because it was very obvious that no social issue could be properly solved by a single discipline." This multidisciplinary approach led to the creation in 2012 of a new research field, disaster science.

The panel also spoke about the factors that determine the value of research, the need for funding and the impact of international collaboration. An audience member asked about gender balance and how universities can promote an environment where female researchers can flourish.

The panel agreed on the importance of balanced gender participation in research, and shared various initiatives at their institutions. These include having dedicated centers for the promotion of gender equality, advisory and counselling groups, good maternity and nursery support programmes, flexible laboratory hours and special funding.

Tohoku University came in at number 27 - a slight improvement from last year - on a list that included more than 550 institutions across the Asian continent. Japan was the most represented country on the list, with 116 ranked institutions.

"One of the big trends in the world rankings is the shift in the balance of power between the West and the East. It's modest but very clear," said Baty, who gave a brief overview of the metrics and results. "It's not just Asia being more widely represented overall, but being more prominently represented among the super elite of the world's top 200. These are very exciting times for higher education in Asia."