The focus this time was on practical applications, with active duty fire fighters taking part. There were also more integrated robots capable of increasingly complex and sophisticated tasks.

"I had expected to see development on individual, state-of-the art components, but this is way beyond that," said Professor Robin R. Murphy, director of the Center for Robot-Assisted Search and Rescue, and the Center for Emergency Informatics at Texas A&M University. "The commitment to building systems that would really and truly work in the field is impressive, as is how realistic and ready-to-use many of these robots already are." 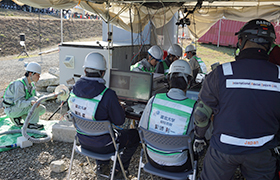 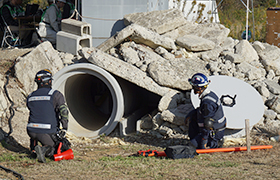 Earlier this year, Tohoku University Professor Satoshi Tadokoro, who is also the program manager of the ImPACT-TRC, unveiled a version of his Active Scope Camera robot that included the ability to levitate its camera-fitted head to get around obstacles.

The ASC is now a fully integrated system featuring multi-modal sensing. This allows it to automatically find the victims' trails, hear the victims' voices under noise, and perform 3D mapping and localisation in a confined space. A new 2-DoF air-jet nozzle also offers greater control of the floating head motion and camera stability.

The 8 meter long serpentine robot moves through the vibration of its short brush-like hairs, and is most effective penetrating small gaps in rubble. According to Professor Masashi Konyo, who works with Tadokoro, a new remote auto-insertion system is expected to enhance the robot's remote controllability and autonomy. 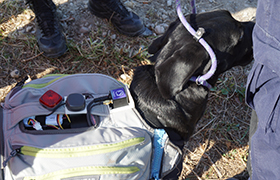 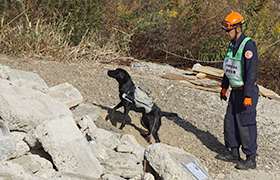 The cyber enhanced canines have new, upgraded suits. In addition to having a camera and IMU-GPS unit - which enable the dogs to be monitored even in remote places - each cyber-enhanced suit is now also equipped with an electrocardiography device to estimate the dog's emotional state from its heart rate variation and acceleration.

"The dogs are most effective in a rescue if they feel good and are highly motivated to find the victims," said Professor Kazunori Ohno, whose team at Tohoku University is developing the vests. "Like humans, dogs can get tired or stressed or affected by their surroundings. When that happens, their ability level drops. By measuring the dogs' heart rate variation and acceleration, we can monitor their physical and emotional condition, and decide whether it is better to continue the search or take a break." 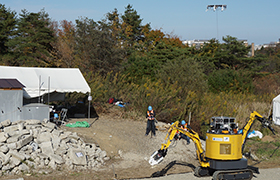 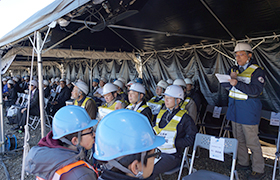 There are upgrades too, to the Construction Robot, built to remove heavy debris, and perform high risk construction on steep slopes and irregular terrain. Tohoku University's Keiji Nagatani's lab works on the attached drone, which gives the robot its enhanced aerial vision. In this latest version, the tethered drone has a capability to hover autonomously.

"A typical drone can stay in one place with GPS information without an operator's control," said Nagatani. "However, when there are steep cliffs or large trees nearby, the GPS signal becomes weak and unreliable. Our drone now uses an estimation of its tether shape, and can stay in one place autonomously without GPS information. This is exciting new technology for tethered drones." 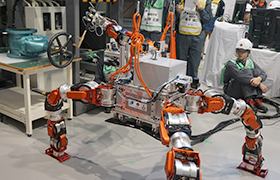 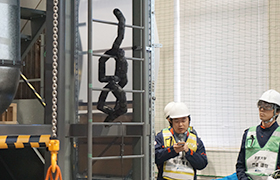 Other robots featured in the demonstration included a thick serpentine robot, which can climb pipes, vents and ladders without getting entangled.

And the Legged Robot, which has an omni-hand newly developed by Tohoku University's Professor Kenjiro Tadakuma. It can handle gadgets and open very tight valves regardless of shape and weight.

Murphy, who is also a computer science and engineering professor at Texas A&M University, credits Tadokoro's vision for the success of the ImPACT-TRC, which wraps up in 2018. "Satoshi and I have known each other for a very long time and we've both had the idea that robots could and should be used in disaster situations.

"I'm really impressed that he's been able to make the vision happen by bringing such a talented group of researchers and industry players together, working directly with users and emergency responders to make a real difference."