Tohoku University held a special event last week to celebrate the official registration of August 21 as the date that Japan welcomed its first female university students. 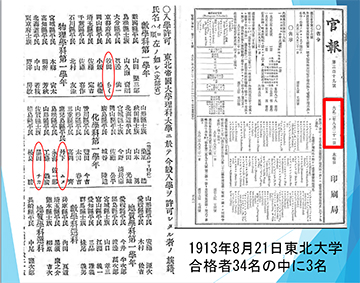 It was on that date in 1913 that the admission of three female students to Tohoku Imperial University - the forerunner of Tohoku University - was announced in the official gazette. That moment broke the gender barrier in Japanese academia, marking the first time in the country's history, that female students were accepted into a national university.

The three pioneering women were Chika Kuroda and Ume Tange who studied chemistry, and Raku Makita who studied mathematics.

To honour them - and the millions of women who have since followed in their footsteps - Tohoku University applied to the Japan Anniversary Association earlier this year, to register August 21 as a nationwide commemorative day. 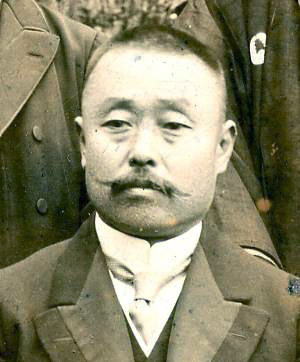 About 110 people attended the inaugural event, which was held online in two parts. The first opened with a message from President Hideo Ohno. "All this was possible because Masataro Sawayanagi, the first president of Tohoku Imperial University, recognized the benefit of adopting an open door policy, to attract excellent students regardless of their gender or background."

Associate Professor Satoshi Kato of the Tohoku University Archives followed up with a brief history of the university's early days at the end of the Meiji era. At that time, universities were the preserve of male students from the old high school system. "It was unthinkable for women to enter university as a regular student," he said. 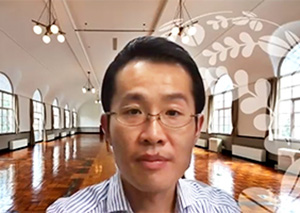 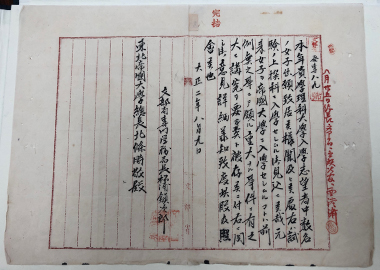 The admission of Kuroda, Tange and Makita was controversial in the media, male students campaigned against it, and the Ministry of Education even sent a letter of inquiry to Tohoku Imperial University, claiming that there was no precedent for the admission of women. But the university held firm.

The three extraordinary women were not only trailblazers as students, they went on to have successful careers after graduation. Kuroda, in particular, became the first female chemist in Japan and later served as an honorary professor at what is now Ochanomizu University in Tokyo. 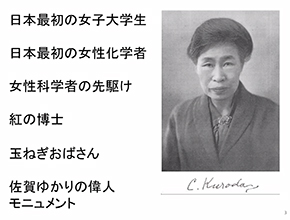 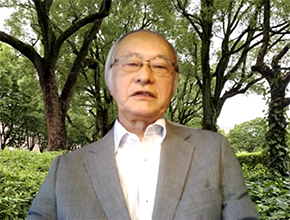 Kotaro Kuroda, professor emeritus at Nagoya University and grandnephew of Chika Kuroda, gave a lecture titled "The Footsteps of Chika Kuroda, the First Female University Student." He said that she always spoke fondly of her time in research work, and claimed to owe much of her success to her mentor, Professor Riko Majima.

The first part of the day's event ended fittingly with the announcement of the 7th Sawayanagi Masataro Memorial Prize for Gender Equality, named for the aforementioned university president who first opened the doors to women.

Chisato Miyaura, Vice President of Special Mission Strategy and Gender Equality Promotion at Tokyo University of Agriculture and Technology, was this year's recipient. 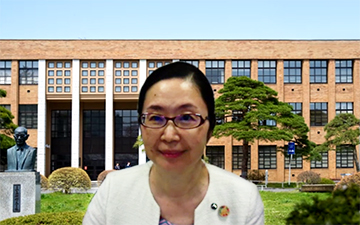 "Chisato Miyaura's achievements over the years have had a very strong influence on many universities across Japan," said Noriko Osumi, Tohoku University's Vice President for Public Relations and the Promotion of Diversity. "She has also held key positions on national committees, and made significant contributions to the implementation of national policies on gender and human resource development."

From acknowledging the past to looking to the future, the Tohoku University Science Angels - female graduate students who serve as role models to school-age children interested in science - took over in the second half of the day with an online Open Campus activity.

Three Science Angels representing different STEM fields, gave brief presentations about their research to about 40 high school students. There were also breakout rooms for more casual questions. The high school students wanted to know about Tohoku University and life on campus; recent changes due to the coronavirus pandemic; the difference between research and clinical work; and tips on effective studying methods. 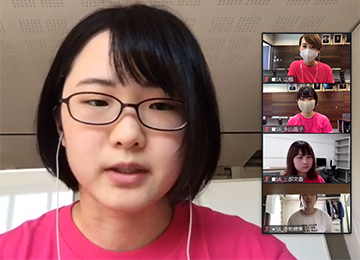 There were also many questions about life as a female researcher. Specifically whether men and women work well together in the laboratories; and whether it is possible to have a career after getting married and having a child.

"Our aim was to encourage students who are interested in science and becoming researchers to come to our university," said Associate Professor Mariko Ogawa of the Tohoku University Center for Gender Equality Promotion. "There are more women in STEM fields now, but we want to raise the number even more. It was good to hear the enthusiasm of the young students in the breakout rooms."

The Science Angels programme was initiated in 2006 and remains a cornerstone of Tohoku University's on-going efforts to promote the role of women in science and technology.