Site of asteroid impact changed the history of life

An asteroid, also known as the Chicxulub Impactor, hit Earth some 66 million years ago, causing a crater 180 km wide. The impact of the asteroid heated organic matter in rocks and ejected it into the atmosphere, forming soot in the stratosphere.

Soot is a strong, light-absorbing aerosol that caused global climate changes that triggered the mass extinction of dinosaurs, ammonites, and other animals, and led to the macroevolution of mammals and the appearance of humans.

Based on results of a new study, the researchers say that the probability of the mass-extinction occurring was only 13 percent. This is because the catastrophic chain of events could only have occurred if the asteroid had hit the hydrocarbon-rich areas occupying approximately 13 percent of the Earth's surface.

Led by Tohoku University Professor Kunio Kaiho, the researchers came by their hypothesis by calculating the amount of soot in the stratosphere and estimating climate changes caused by soot using a global climate model developed at the Meteorological Research Institute. The results are significant because they explain the pattern of extinction and survival. 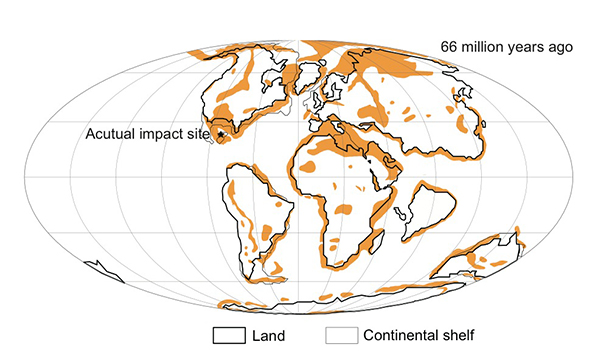 Mass extinction only occurred when the asteroid having 9-km diameter hit the orange areas.
ⒸKunio Kaiho

Kaiho clarified the relationship between the findings and concluded that the significant cooling and mass-extinction event could have only have occurred if the asteroid had hit hydrocarbon-rich areas occupying approximately 13 percent of the Earth's surface (orange areas in Fig. 1).

If the asteroid had hit a low-medium hydrocarbon area on Earth (occupying approximately 87 percent of the Earth's surface), mass extinction could not have occurred and the Mesozoic biota could have persisted beyond the Cretaceous/Paleogene boundary.

The site of the asteroid impact, therefore, changed the history of life on Earth.

According to the study, soot from hydrocarbon-rich areas caused global cooling of 8-11°C and cooling on land of 13-17°C. It also caused a decrease in precipitation by approximately 70-85 percent on land and a decrease of approximately 5-7°C in seawater temperature at a 50-m water depth, leading to mass extinction of life forms including dinosaurs and ammonites.

At the time, these hydrocarbon-rich areas were marine coastal margins, where the productivity of marine algae was generally high and sedimentary rocks were thickly deposited. Therefore, these areas contained a high amount of organic matter, part of which became soot from the heat of the asteroid's impact.

Thus, the researchers concluded that the Chicxulub impact occurred in a hydrocarbon-rich area and is a rare case of mass extinction being caused at such an impact site. Kaiho and Oshima are doing further studies to clarify the frequency of all the cooling events by impacts.

Kaiho's team is analyzing climate change caused by large volcanic eruptions that may have contributed to other mass extinctions. It is hoped that the results will lead to further understanding of the processes behind those mass extinctions.