Many attempts have been made to explain the molecular origin of AHE. In the 1960s, AHE was thought to be solely contained in the molecular structure of ATP, and quantum-chemical calculations were conducted without any quantitative success.

In the late 1990s, more investigations into AHE were conducted using quantum mechanical calculations in water that was treated as a continuum dielectric medium. However, the role of the water solvent as a structured assembly of small molecules in the energetics of AHE has remained unclear.

Now researchers in Japan have, for the first time, succeeded in unveiling the microscopic mechanism of AHE release in water, using the state-of-the-art computational approach. 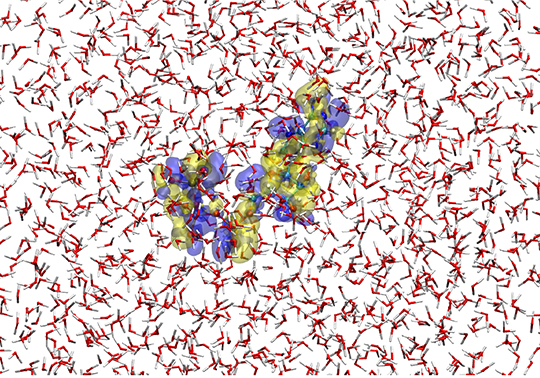 A snapshot of the hybrid quantum/ classical simulation for ATP4- placed in water solvent. Here, the ATP solute is described by a method of quantum chemistry and the solvent water molecules are represented with a classical force field. The blue and yellow transparent surfaces show, respectively, the isovalue-surfaces of the increase and decrease in electron density by 3.0x10-4 au relative to the average electron distribution of ATP4- in the solution. Thus, the electronic state of the solute (ATP4-) as well as the molecular property of the surrounding solvent are faithfully represented in the simulation.

In the study led by Hideaki Takahashi at Tohoku University, the effects of the molecular properties of the solvent, as well as the electronic states of the solutes, were fully considered. Such large-scale simulations were made possible by hybrid quantum and classical computational techniques implemented on massively parallel computers. This refers to the use of a large number of processors simultaneously performing a set of coordinated computations.

Furthermore, the simulation was followed by free energy calculations using a high-accuracy-high-speed method developed by Nobuyuki Matubayasi at Osaka University.

With this study, the research team explained why the hydrolysis free energies of ATP and pyrophosphate are mostly -10 kcal/mol and are insensitive to the total charges of these solutes. They also discovered that the constancy of AHE is a result of the superb compensation between the electronic-state stabilization and the destabilization in hydration free energy of the solutes.

This is significant because it constitutes a new fundamental issue to be described in standard biology textbooks.

The researchers' collaborative work was made possible by the Grant-in-Aid for Scientific Research on Innovative Areas "Hydration and ATP Energy" directed by Tohoku University's Makoto Suzuki.