Bacterial Bloom as the Earth Thawed: Photosynthetic Organisms During the Snowball Earth

Some researchers hypothesize that ice sheets enveloped the earth during the Marinoan glaciation (650-535 million years ago) in what is dubbed the "Snowball Earth." The glaciation also impacted the climate and chemical compositions of the oceans, restraining the evolution of early life. Yet, as the earth warmed, and the Ediacaran period dawned, biotic life began to evolve.

A research team from Tohoku University has unveiled more about the evolutionary process of the Marinoan-Ediacaran transition. Using biomarker evidence, they revealed possible photosynthetic activity during the Marinoan glaciation. This was followed by photosynthetic organisms and bacteria entering a period of low productivity. However, as eukaryotes expanded during the early Ediacaran period, they blossomed.

Dr. Kunio Kaiho, who co-authored a paper with Atena Shizuya, said, "Our findings help clarify the evolution of primitive to complex animals in the aftermath of the Snowball Earth." Their paper online was published in the journal Global and Planetary Change on August 17, 2021.

The late Neoproterozoic era (650-530 million years ago) witnessed one of the most severe ice ages in the Earth's 4.6-billion-year history. Researchers believe that ice sheets covered the entire earth since glaciogenic units, such as ice-rafted debris, are distributed globally. Overlaying these glaciogenic formations are cap carbonates. These precipitate under warm conditions and therefore suggest that the glacial environment changed rapidly into a greenhouse environment. 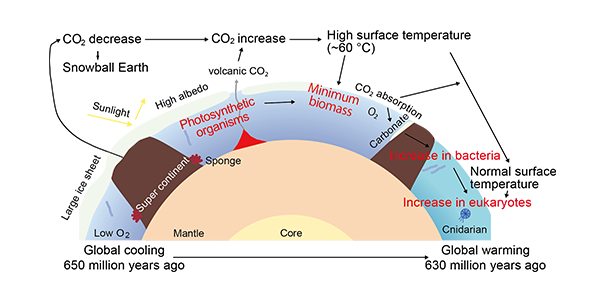 Changes in Earth's environment and lifeforms during the Snowball Earth and its aftermath 650-630 million years ago. Black arrows show changes. The appearance of a supercontinent caused a decrease in ocean volcanism, which resulted in a decrease in atmospheric CO2 and the Snowball Earth. Red words show new findings in this paper. ⒸKunio Kaiho

Whilst the Snowball Earth theory explains the wide distributions of glacial formations, it fails to shed light on the survival of living organisms. To counteract this, some researchers argue that sedimentary organic molecules, a molecular clock, and fossils from the late Neoproterozoic era are evidence that primitive eukaryotes such as sponges survived this severe ice age. Alternative models also propose that an ice-free open sea existed during the glaciation and acted as an oasis for marine life.

But what is understood is that the Marinoan glaciation and the succeeding extreme climatic transition likely had a marked impact on the biosphere. Shortly after the ice age, the Lantian biota, the earliest-known complex macroscopic multicellular eukaryotes, emerged. The Lantian biota includes macrofossils that are phylogenetically uncertain but morphologically and taxonomically diverse. Meanwhile, pre-Marinoan species have simple body plans with limited taxonomic variety.

Bacteria and eukaryote biomarkers demonstrate that bacteria dominated before the glaciation, whereas steranes/hopanes ratios illustrate that eukaryotes dominated just before it. However, the relationship between the biosphere changes and the Marinoan glaciation is unclear.

In 2011, Kaiho and his team traveled to Three Gorges, China under the guidance of China University of Science's Dr. Jinnan Tong to take sedimentary rock samples from the deeper outcrops of marine sedimentary rocks. From 2015 onwards, Shizuya and Kaiho analyzed the biomarkers of algae, photosynthetic activity, bacteria, and eukaryotes from the rock samples. 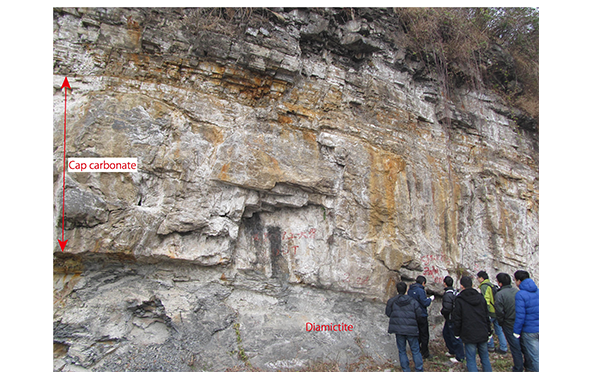 They found photosynthetic activity based on n-C17 + n-C19 alkanes for algae and pristane + phytane during the Marinoan glaciation. Hopanes within the early and late carbonate deposition showed photosynthetic organisms and other bacteria entering a state of low productivity before recovering. And steranes from carbonates and mudstones after the cap carbonate deposition from the early Ediacaran period indicated the expansion of eukaryotes. The expansion of eukaryotes corresponded to the Lantian biota being morphologically diverse when compared to pre-Marinoan species.

Kaiho believes we are one step closer to understanding the evolutionary process that occurred before and after Snowball Earth. "The environmental stress of closed ocean environments for the atmosphere followed by high temperatures around 60°C may have produced more complex animals in the aftermath." Their findings show that bacterial recovery preceded eukaryotes' domination.