Using computer simulations, researchers are learning how lasers might be used to switch how electrons spin within magnetic materials, making room for faster magnetic memory devices.

Tohoku University researchers have developed a computational simulation that shows that using ultrafast laser pulses to excite electrons in a magnetic material switches them into a transient non-magnetic state. This could reduce the time involved in manipulating a material's magnetism, improving magnetic storage and information processing technologies. 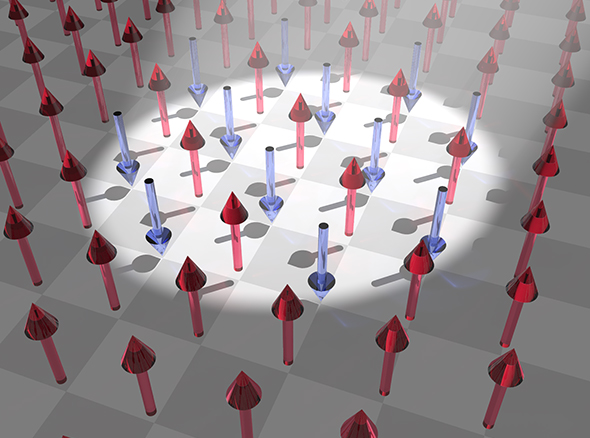 By applying light, the parallel spin arrangement is changed to antiparallel.

Fast memory storage requires rapid spin reversal.
Researchers have been studying ways to control this using ultrafast lasers to get even faster memory storage. The shorter the laser's pulse, the faster the reversal will be.

Tohoku University physicists Atsushi Ono and Sumio Ishihara developed a computational approach to model how electrons and their spins interact with each other and react to laser light.

Understanding these interactions, as well as the fundamental limits of spin reversal, is necessary for future development of magnetic memory devices. The next step will require physical experiments to test the model's predictions.

"Experimental confirmations are indispensable for establishing the present proposal," write the researchers in their study published in the journal Physical Review Letters. Ono and Ishihara suggest perovskite manganites and layered manganites as possible materials for testing their model. They also suggest a variety of techniques, such as magnetic x-ray diffraction and photoemission spectroscopy, for observing the transient antiferromagnetic state.