An international research team has found a surprising three-dimensional arrangement of electrons in the Y-based high-temperature superconductor.

The team - comprising researchers from Tohoku University, SLAC National Accelerator Laboratory, Stanford University and University of British Colombia - made the discovery while successfully combining powerful magnetic field pulses with some of the brightest X-rays on the planet.

The localization of electrons forming the special regular patterns called a charge density wave (CDW) had previously been known as a mysterious phenomenon of high temperature superconductivities. That is because the direct observation of CDW in very high magnetic fields had been considered an "impossible mission" due to the absence of high magnetic field device compatible with X-ray free electron laser.

But the IMR group has now developed an inch-size miniature pulsed magnet that can generate an extremely strong magnetic field of 30 Tesla and installed it into the beam line of a Linac Coherent Light Source at SLAC.

The results resolve discrepancies found in previous experiments, and offer a new picture of the behaviors of electrons in these exotic materials under extreme conditions. The researchers hope this will aid the design and development of new superconductors that work at higher temperatures.

This study was supported by IMR through the ICC-IMR Research Project and by the Interdepartmental Doctoral Degree Program for Multi-dimensional Materials Science Leaders (MD program). 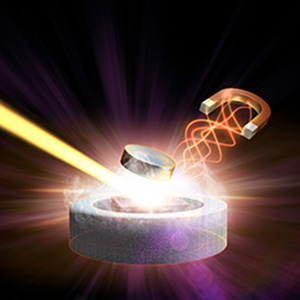 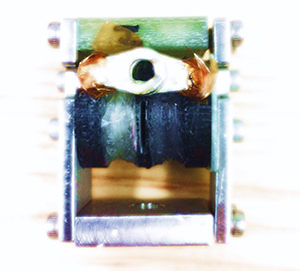 Fig. ２
The IMR mini magnet used for the experiment is only 25.4 mm long.