DNA amplification -- a molecular "photocopying" technique where genetic material is replicated -- has many applications in scientific research, forensic science, and medical laboratories. It is useful for detecting and identifying certain forms of cancer and viral diseases, and holds promise for treating these diseases in the future.

The DNA amplification process currently requires thermal cycling across a broad range of high temperatures, ranging from 48°C to 95°C (118°F to 203°F). As a result, the quality of biological samples being processed is often compromised. A team of Japanese scientists has now developed a method of amplifying DNA at body temperature within artificial cells that resemble those of humans.

Their findings were published on July 9, 2019 in Chemical Communication.

DNA amplification is extensively used in molecular biology research for DNA sequencing to determine the exact structure of nucleotides that make up an organism's genetic material, as well as for DNA cloning and studies related to gene expression. It is also used to analyze DNA collected from ancient samples. Forensic applications include genetic fingerprinting, a technique that is often used to incriminate or vindicate suspects in a criminal investigation, to identify the body of a deceased person, or for parental/paternity tests to confirm the biological parents of a child. Medical applications of DNA replication include the detection and identification of several types of cancer, as well as infectious diseases, including the Human Immunodeficiency Virus (HIV) -- which can be notoriously difficult to detect.

Currently, the polymerase chain reaction (PCR) technique is commonly used to amplify a segment of DNA. During the PCR process, the DNA sample is repeatedly heated so that it separates into two single strands of DNA. With the aid of an enzyme primer, each new molecule now consists of one old strand of DNA together with one new DNA strand to form the double helix.

While amplification of DNA has been achieved in artificial cells with the PCR method, the repetitive cycles over a high range of temperatures often damage the delicate molecules that make up the genetic sample. Isothermal amplification, which allows rapid amplification of specific DNA molecules at a lower temperature that remains constant, could solve this problem. Instead of PCR in solution, this method utilizes encapsulated molecular tool designed for repeating copy-and-release one single-stranded DNA with a sequence of synthetic DNA that mirrors the original strand -- a process known as DNA circuit amplification. 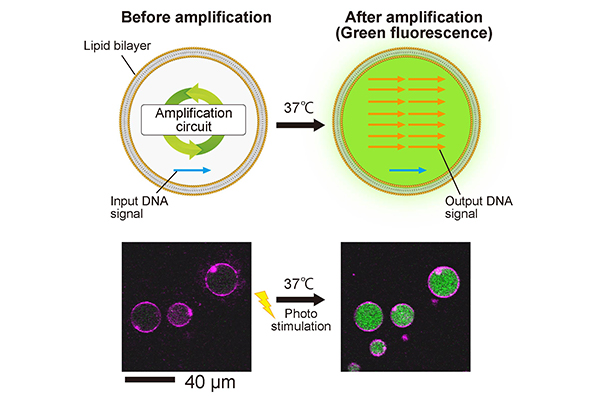 "In our study, artificial cells that amplify DNA over 5000-fold in response to external stimuli at body temperature were created", said Shinichiro Nomura, an associate professor at the Graduate School of Engineering, Tohoku University in Japan, and co-author of the study.

Because this functions at body temperature, "in the future, it will enable scientists to develop artificial cells and molecular robots that will be able to diagnose cancer cells and take care of cells by detecting minute amounts of signal molecules in situ within the body," said Nomura.

In addition, the timing at which amplification occurs can be artificially triggered and regulated using light, a process known as photo-stimulation. Photo-triggered DNA amplification is exciting as it would enable scientists to produce and assemble molecular nanostructures within artificial cells with fine-tuned precision over where and when they are activated within the cell. These artificial molecular nanostructures could essentially act as molecular robots that are able to detect and fight disease from within the cell.

According to Nomura, the next steps include developing control systems in artificial cells using the amplified DNAs, and ultimately the detection of signal molecules that are produced in cancer cells.

In living organisms, signal molecules play an important role in cellular communication processes that govern and coordinate cellular activities and actions, including cell development, tissue repair and immune responses to disease. Any errors during cell signaling processes can result in diseases such as diabetes, cancer, and autoimmune diseases. By understanding cell signaling and being able to detect signal molecules and recognize errors in these communication signals, clinicians may be able to identify and treat diseases more effectively.