The evolution of Japanese color vocabulary over the past 30 years

Color plays an important role in conveying visual information. For example, color can help the observer find an object in a cluttered environment. Although the human eye can distinguish millions of colors, human languages have only a few color terms, such as "red," "green," "blue" and "yellow," which speakers can use to communicate about colors in everyday life. These color terms change over time as a language evolves, and the Japanese language is no exception.

This became clear through the work of an international collaboration between researchers at Tohoku University, their colleagues at Tokyo Institute of Technology and Ohio State University.

The researchers investigated the number of color categories (such as aka, midori, ao, ki, etc.) that are commonly used by native Japanese speakers. They asked 52 participants to name 320 color samples of various hues and lightness (plus black, white and several grays) using only single color words without modifiers (no "greenish yellow" or "light purple"). 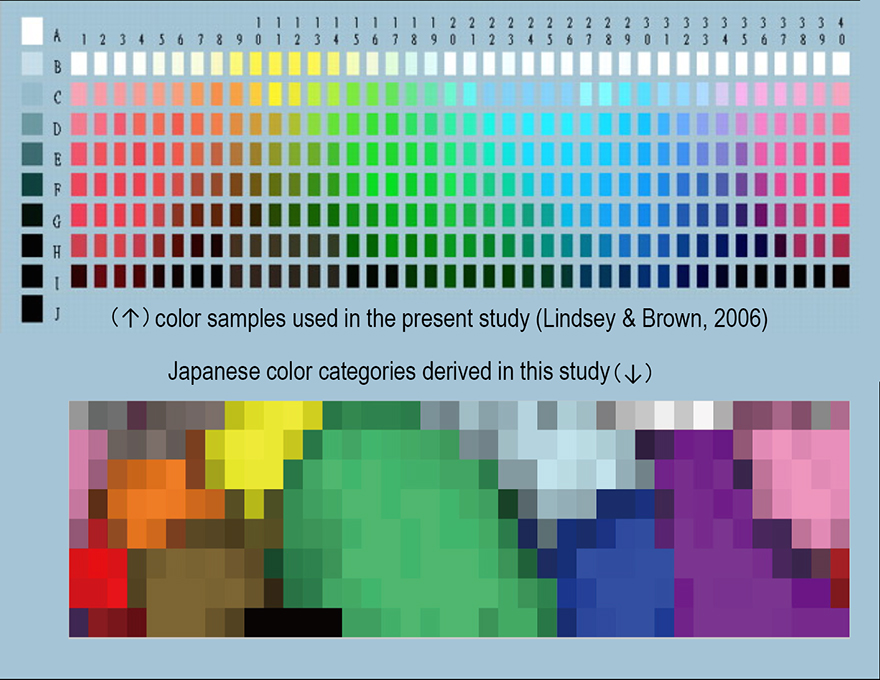 Thirty years ago, a study of Japanese color categories (Uchikawa & Boynton, 1987) did not reveal mizu as a basic color category, because the informants in that earlier study often used mizu ("water") and ao (blue) interchangeably. Conversely, Uchikawa & Boynton found that kusa ("grass") was a very popular term for yellow-green, whereas, in the present study, kusa has been largely replaced with matcha ("ceremonial green tea"). These results illustrate that color terms, like many other aspects of language, change over time.

In contrast to these recent changes, there is one tradition that has not changed over the past millennium: the mixed use of green and blue. Careful study of classic Japanese poems before the 10th century showed that ao ("blue") was used to name both things that were clearly blue and also things that were clearly green; the same was true of midori ("green"). Even today, modern Japanese people refer to the color of the green traffic light, lush green leaves and green vegetables, as ao ("blue"). However, the use of ao and midori are otherwise quite distinct.

This study showed that although modern Japanese is not a "grue" language - since blue and green are distinct color categories - Japanese people have nonetheless retained traditional expressions from the classic poetic tradition of a thousand years ago.