Astronomers found that active star formation upswells galaxies, like yeast helps bread rise. Using three powerful telescopes on the ground and in orbit, they observed galaxies from 11 billion years ago and found explosive formation of stars in the cores of galaxies. This suggests that galaxies can change their own shape without interaction with other galaxies.

Observation images of a galaxy 11 billion light-years away. Submillimeter waves detected with ALMA are shown in the left, indicating the location of dense dust and gas where stars are being formed. Optical and infrared light seen with the Hubble Space Telescope are shown in the middle and right, respectively. A large galactic disk is seen in infrared, while three young star clusters are seen in optical light. Credit: ALMA (ESO/NAOJ/NRAO), NASA/ESA Hubble Space Telescope, Tadaki et al.

"Massive elliptical galaxies are believed to be formed from collisions of disk galaxies," said Ken-ichi Tadaki, the lead author of two research papers and a postdoctoral researcher at the National Astronomical Observatory of Japan (NAOJ). "But, it is uncertain whether all the elliptical galaxies have experienced galaxy collision. There may be an alternative path." 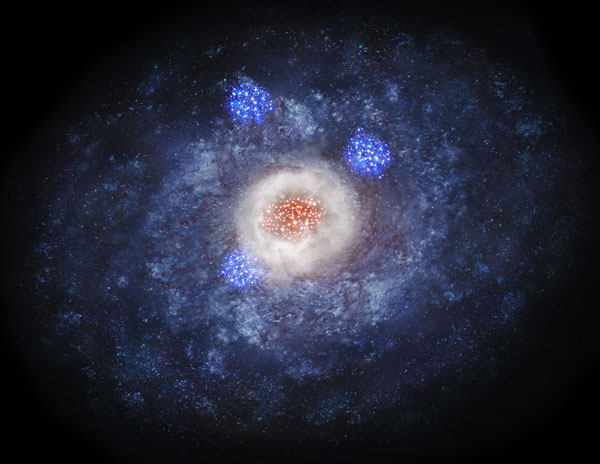 Artist's impression of a disk galaxy transforming in to an elliptical galaxy. Stars are actively formed in the massive reservoir of dust and gas at the center of the galaxy. Credit: NAOJ

Aiming to understand galactic metamorphosis, the international team explored distant galaxies 11 billion light-years away. Because it takes time for the light from distant objects to reach us, by observing galaxies 11 billion light-years away, the team can see what the Universe looked like 11 billion years ago, 3 billion years after the Big Bang. This corresponds with the peak epoch of galaxy formation; the foundations of most galaxies were formed in this epoch.

Receiving faint light which has travelled 11 billion years is tough work. The team harnessed the power of three telescopes to anatomize the ancient galaxies. First, they used NAOJ's 8.2-m Subaru Telescope in Hawai`i and picked out 25 galaxies in this epoch. Then they targeted the galaxies for observations with NASA/ESA's Hubble Space Telescope (HST) and the Atacama Large Millimeter/submillimeter Array (ALMA). The astronomers used HST to capture the light from stars which tells us the "current" (as of when the light was emitted, 11 billion years ago) shape of the galaxies, while ALMA observed submillimeter waves from cold clouds of gas and dust, where new stars are being formed. By combining the two, we know the shapes of the galaxies 11 billion years ago and how they are evolving. 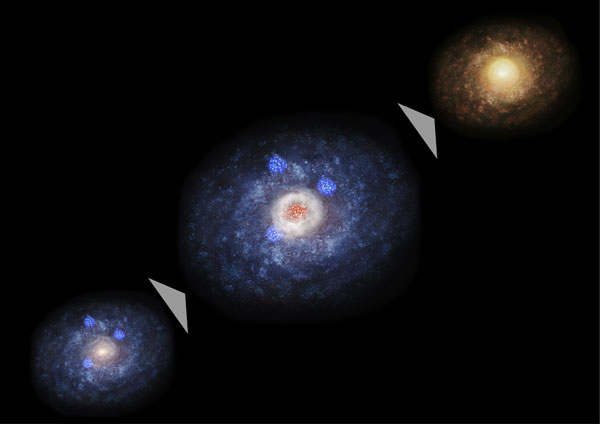 Thanks to their high resolution, HST and ALMA could illustrate the metamorphosis of the galaxies. With HST images the team found that a disk component dominates the galaxies. Meanwhile, the ALMA images show that there is a massive reservoir of gas and dust, the material of stars, so that stars are forming very actively. The star formation activity is so high that huge numbers of stars will be formed at the centers of the galaxies. This leads the astronomers to think that ultimately the galaxies will be dominated by the stellar bulge and become elliptical or lenticular galaxies.

"Here, we obtained firm evidence that dense galactic cores can be formed without galaxy collisions. They can also be formed by intense star formation in the heart of the galaxy." said Tadaki. The team used the European Southern Observatory's Very Large Telescope to observe the target galaxies and confirmed that there are no indications of massive galaxy collisions.