We all know that physical exercise is crucial for overall well-being and helps postpone aging-related disorders; what is more surprising is that physical exercise can have beneficial effects not only on the body but on cognitive functions too. Unfortunately, physical activities are not always possible for people suffering or recovering from long-term diseases.

IVR, which allows the creation of a realistic virtual world that we can explore with our virtual body, can help solve this problem. It sounds unreal, but the illusion is so effective that even with the person sitting and the virtual body walking, the person thinks he/she is moving - it even generates comparable physiological reactions.

Professor Ryuta Kawashima, director of IDAC, led the team of researchers to explore whether or not virtual training can have similar benefits on cognitive functions as physical exercise. Healthy, young participants underwent the virtual training protocol. Wearing an IVR headset while sitting, they saw a virtual body (also called an avatar) displayed in the first person perspective. This created the illusory feeling of being the avatar itself. The virtual body alternated between 30 seconds of walking and 30 seconds of running for 8 minutes.

The virtual body as experienced by the userⒸTohoku University

Researchers found that participants' heart rate increased coherently with the virtual movements, despite the fact that subjects were completely still; more importantly, cognitive functions (specifically, executive functions) and their neural basis were tested before and after the virtual training. The results showed that participants improved their cognitive performance (specifically, they were faster), as also confirmed by the increased activation of the brain-related areas (specifically, the left dorsolateral prefrontal cortex). 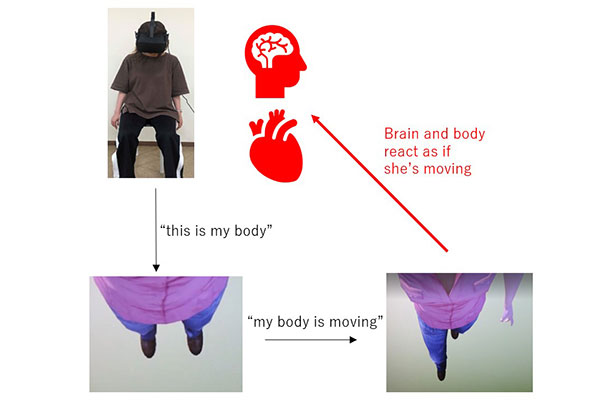 A schematic theoretical interpretation of the virtual illusion, leading to measurable physiological effects on the person's body ⒸTohoku University

"The application of immersive virtual reality for clinical purposes is often doubted because it was originally designed for entertainment," says Professor Dalila Burin, who developed and conducted the experiment. "But this study proves that training protocols in IVR can be useful for people with motor impairments to have comparable benefits to real physical activity." Professor Burin adds, "It is also beneficial for people who want to start exercising in an entertaining and safe way."

By introducing the virtual reality technology in the cognitive neuroscience field, researchers aim to provide clinical solutions for patients and also contribute to theoretical models of body representation and motor control.