High efficiency synthesis of insulin by self-assembly based organic chemistry

Researchers at Tokai, Osaka, Tohoku and Fukuoka Universities report in the journal Communications Chemistry on the synthesis of insulin based on the self-assembly of polypeptide chains at about 40% efficiency. This new approach is expected to enable flexibility in synthesizing order made insulin compounds that cannot be produced using conventional biological approaches based on genetic engineering.

Insulin is a hormone that acts to lower the rise in blood glucose level after meals and is used as a therapeutic agent for diabetes. Since insulin has a characteristic molecular structure in which two peptide chains (A and B chains) are connected by two disulfide bridges (SS bonds), chemical synthesis is considered difficult to achieve. Currently, insulin is manufactured by a genetic engineering process.

Michio Iwaoka at Tokai University, Japan, in collaboration with colleagues Hironobu Hojo at Osaka University Kenji Inaba at Tohoku University, and Setsuko Ando at Fukuoka University, report on their success in efficiently synthesizing insulin by using only chemical processes based on organic synthesis.

The research team has previously reported on the efficient chemical synthesis of insulin (seleno-insulin) in which selenocysteine was substituted for insulin containing cysteine to replace the SS bond between the peptide chains with a diselenide crosslink (SeSe bond Angew. Chem., Int. Ed., 2017, 56(20), 5522-5526).

In their most recent studies, improvements have been made on the previous synthesis method of seleno-insulin and natural insulin (bovine insulin) has been produced at a higher yield (approximately 40%) than seleno-insulin. By applying this new method, they have succeeded in the efficient chemical synthesis of insulin families such as human insulin and human type 2 relaxin. 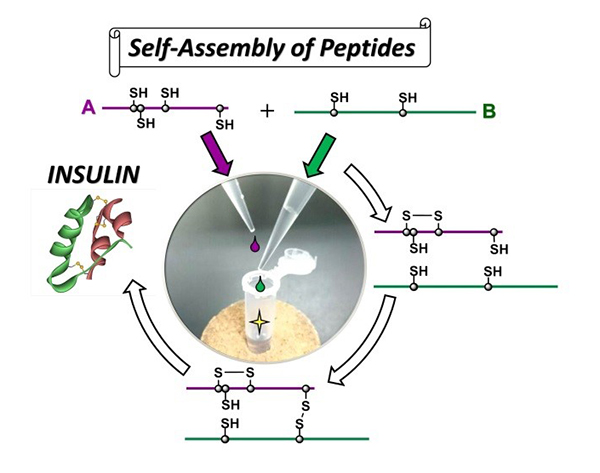 The team first examined the process (oxidative folding pathway) by which insulin A chain and insulin B chain combine to form the structure of natural type insulin. Based on the pathway, they succeeded in optimizing folding conditions of bovine insulin and obtaining bovine insulin at high yield of about 40%.

The advantages of this synthesis method is that it does not require any large-scale production equipment because it does not use any genetic engineering technique and insulin can be produced by the simple process of mixing A chain and B chain--both of which can be synthesized by a solid phase peptide synthesis method using a resin.

"Using this 'self-assembly' approach it would be possible to modify the structure of insulin, such as introducing an unnatural amino acid into insulin," explains Iwaoka. "We expect that this method could be applied to the development of many types of insulin preparations such as long-acting and super quick-acting types."