Stability of unmanned aerial vehicles in heavy winds can be improved through rotor placement and angle, according to a team from Tohoku University and Kanazawa Institute of Technology.

Is it a bird? Is it a plane? The prevalence of multi-rotor drones has increased dramatically in recent years, but in headwinds they pitch upwards unpredictably. Engineers from Tohoku University, Japan, have shown that angling the rotor blades of a quad-rotor unmanned aerial vehicles by just 20 degrees can reduce pitching by a quarter. Their work is published in the International Journal of Micro Air Vehicles.

Multi-rotors have gotten much smaller since the turn of the century, and they have many uses, including for inspection, surveillance and transportation. A multi-rotor setup allows for both vertical takeoff and hover in calm conditions, but they are unstable in wind. Their rotors flap and the vehicle pitches upwards in a headwind. In this experiment, Hikaru Otsuka and colleagues set out to evaluate whether angling the rotor blades differently would improve control of quad-rotor vehicles in winds. 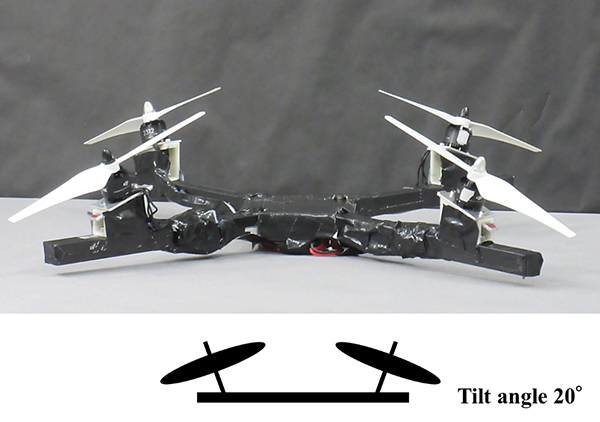 Pitching can occur because of three factors: the drag of the body, the asymmetry induced flow distribution on the rotor with the wind, and rotor thrust difference between the front and rear rotors. The team first estimated the effects of the wake of the front rotors on the rear, then isolated the rotors from the vehicle and measured the effect of different angles in a low-speed wind tunnel. They show that angling the rotors to the outer side by 75 degrees kept the airflow passing each rotor blade isolated, but increasing the angle to 90 or above meant the wake of the front rotors affected the rear. 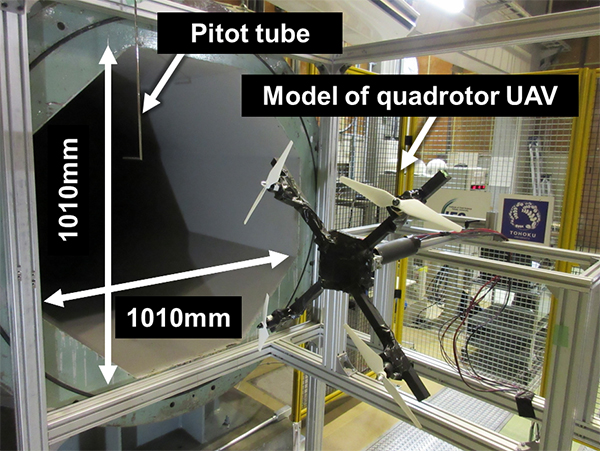 Setup of the wind tunnel experiment.

Then they analyzed how this translated to a complete quad-rotor with all four rotors working together. In the wind tunnel, the team tested various angles of rotor attachment to the quadrotor and the effect on pitching moment generation. They measured the effects of outward and inward tilting of the rotor blades for five different angles. They found that rotor tilting by 20 to the outer side degrades the pitch of the vehicle by 26%.

The authors conclude that tilting of the rotors to the outer side reduces pitching moment of quad-rotor vehicles in winds. The work could have implications for both hobbyists and for professionals who want to use multi-rotor unmanned vehicles outdoor, as for inspections of wind turbines, disaster sites, or for safety of rescue activities.