Tohoku University researchers and colleagues have found an economical way to improve the properties of some 'shape memory' metals, known for their ability to return to their original shape after being deformed. The method could make way for the mass production of these improved metals for a variety of applications, including earthquake-resistant construction materials.

Most metals are made of a large number of crystals but, in some cases, their properties improve when they are formed of a single crystal. However, single-crystal metals are expensive to produce.

Researchers have developed a cheaper production method that takes advantage of a phenomenon known as 'abnormal grain growth.' By using this method, a metal's multiple 'grains', or crystals, grow irregularly, some at the expense of others, when it is exposed to heat. 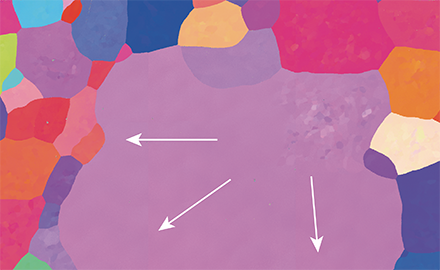 Heat treatment causing a grain to rapidly grow into a large single crystal.

The team's technique involves several cycles of heating and cooling that results in a single-crystal metal bar 70 centimetres in length and 15 millimetres in diameter. This is very large compared to the sizes of current shape memory alloy bars, making it suitable for building and civil engineering applications, says Toshihiro Omori, the lead researcher in the study.

To produce the large single-crystal metal bar, a metal alloy is heated to 900°C then cooled to 500°C, five times. This is followed by four cycles of heating to 740°C then cooling to 500°C. Finally, the metal is heated one last time to 900°C. Omitting the lower temperature heating (740°C)/cooling (500°C) cycles did not lead to the single-crystal result.

The alloy they used, which is made of copper, aluminium and manganese, is a well-known shape memory metal that is easy to cut with machines. Increasing the size of the material's crystals drastically enhances its elasticity. Altering its shape also makes it quite strong. These combined features make it very attractive for building structures that can withstand earthquakes.

This bending test of a copper-aluminium-manganese single-crystal bar (68 cm in length and 16 mm in diameter) produced by cyclic heat treatment shows a super-elastic response with almost no residual strain.

"Since the present technique is advantageous for mass production of single crystals because of the simplicity of the process, this finding opens the way for applications of shape memory single crystals for structural materials, such as for seismic applications in buildings and bridges," conclude the researchers in their study published in the journal Nature Communications.