The actin and myosin complex (actomyosin) generates contraction force of a muscle utilizing the adenosine triphosphate (ATP) hydrolysis reaction. Many attempts have thus been made to explain the molecular origin of the actomyosin motility.

A myosin power stroke model, proposed by Huxley and Simmons in 1971, initiated much research including atomic-structure studies and the investigation of the molecular biology of myosin and actin molecules. The power stroke model, modified lately, is widely adopted in standard biology textbooks.

However, there remains a serious problem. According to the experimental thermodynamics data, the ATP hydrolysis in the myosin head does not produce a myosin state with high enough energy to generate the contraction force.

Now, a research group, led by Emeritus Professor Makoto Suzuki at Tohoku University in collaboration with Professor Nobuyuki Matubayasi at Osaka University, has succeeded in explaining the actomyosin driving mechanism according to the experimental thermodynamics data.

In the study, the water structure in close proximity of an actin filament (F-actin) is modified upon binding with a myosin head hydrolyzing ATP to F-actin, that leads to a change in the affinity to the myosin head and thus to the generation of the driving force of actomyosin. 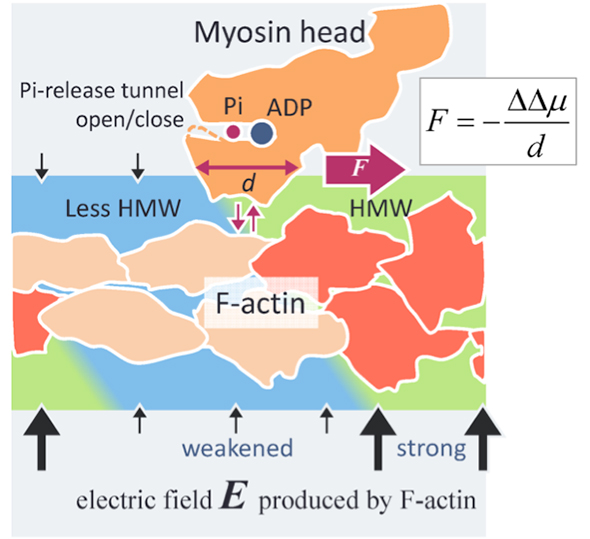 Figure. A novel force generation mechanism of actomyosin
An actin filament (F-actin) produces an electric field (black arrows) as high as 100 MV/m around F-actin due to its negative surface charges. The water molecules in such a high electric field become hyper-mobile water molecules (HMW, light green) in close proximity of F-actin. On the other hand, ATP in solution binds with a myosin head (orange) and is split into adenosine diphosphate (ADP) and inorganic phosphate (Pi) in the head. When the myosin head with ADP and Pi binds with F-actin (orange red), several actin subunits change their structures (beige). Then the electric field strength decreases around these changed actin subunits and the HMW intensity also decreases (light blue) to become close to free water. In the present study, the protein hydration state has been found to be more stable in the stronger HMW region. In the figure, the myosin head is driven to the right where the HMW intensity is stronger (light green), with detaching from F-actin and attaching again with F-actin. The force evaluated by the present method is as high as several piconewtons, which is on the level of the experimental values. This can be a principle of novel surface force acting between a charged macromolecule, such as protein and DNA, and a solute protein widely applicable to science and technology.