A multinational team of researchers from Tohoku University and institutions in the UK, Germany and Switzerland has revealed the magnetic states of nanoscale gyroids, 3D chiral network-like nanostructures. The findings add a new candidate system for research into unconventional information processing and emergent phenomena relevant to spintronics.

Arrays of interacting nanostructures offer the ability to realize unprecedented material properties, as interactions can give rise to new, "emergent" phenomena. In magnetism, such emergent phenomena have so far only been demonstrated in 2D, in artificial spin ices and magnonic crystals. However, progress towards realizing magnetic "metamaterials", which could form the basis of advanced spintronic devices by displaying emergent effects in 3D, has been hampered by two obstacles. The first is the need to fabricate complex 3D building blocks at dimensions smaller than 100 nm (comparable to intrinsic magnetic lengthscales) and the second is the challenge of visualizing their magnetic configurations.

Figure 1: Schematic of the structural units of a single-gyroid network, starting with a pair of vertices which share one of their three struts and are offset by a "twist" angle. The middle image shows how vertex pairs make up one gyroid unit cell, and the right image shows how unit cells assemble into the gyroid network. ⒸJustin Llandro and David Love and András Kovács

The research team therefore decided to study nanoscale magnetic gyroids, 3D networks composed of 3 connected vertices defined by triads of curved nanowire-like struts (Figure 1). Gyroids have attracted much interest, as despite their complexity they can self-assemble from a carefully formulated combination of polymers, which can be used as a 3D mold or template to form free-standing nanostructures (Figure 2). As the struts connect to form spirals, gyroids have a "handedness" or chirality, and their shape makes magnetic gyroids ideal systems to test predictions of new magnetic properties emerging from curvature. Measurements of the optical properties of gyroids even showed that gyroids can have topological properties, which along with chiral effects are currently the subject of intense study to develop new classes of spintronic devices. However, the magnetic states which might exist in gyroids had not yet been established, leading to the present study.

Figure 2: Schematic of the process of producing the Ni-Fe gyroid nanostructures by self-assembly ⒸJustin Llandro and David Love and András Kovács

The researchers produced Ni75Fe25 single-gyroid and double-gyroid (formed from a mirror-image pair of single-gyroids) nanostructures with 11 nm diameter struts and a 42 nm unit cell, via block co-polymer templating and electrodeposition. These dimensions are comparable to domain wall widths and spin wave wavelengths in Ni-Fe. They then imaged the gyroid nanoparticles with off-axis electron holography, which could map the magnetization and stray magnetic field patterns in and around the gyroids' struts with nanometer spatial resolution. Analysis of the patterns with the aid of finite-element micromagnetic simulations revealed a very intricate magnetic state which is overall ferromagnetic but without a unique equilibrium configuration (Figure 3), implying that a magnetic gyroid can adopt a large number of stable states. 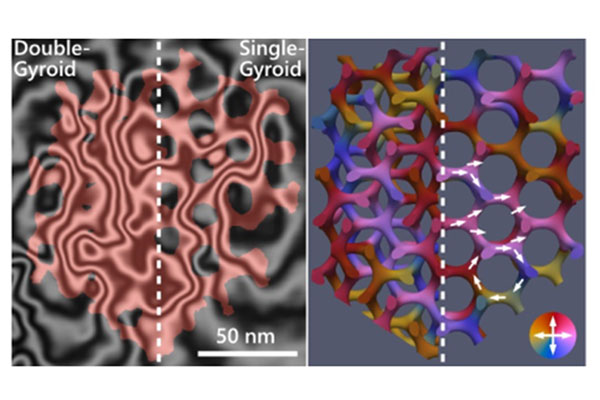 Figure 3: (Left) Magnetic stray field patterns in and around the struts of a Ni-Fe gyroid nanostructure imaged by electron holography, which contains both single-gyroid and double-gyroid regions. The outline of the nanostructure is shown in red. (Right) Micromagnetic simulation of the magnetization distribution of the Ni-Fe gyroid nanoparticle, where the color wheel shows the direction of the magnetization. Arrows highlight the average direction for a set of the gyroid struts. ⒸJustin Llandro and David Love and András Kovács

"These findings establish magnetic gyroids as a candidate of interest for applications such as reservoir computing and spin-wave logic," said lead author Justin Llandro." The research takes an exciting first step towards 3D nanoscale magnetic metamaterials which can be used to uncover new emergent effects and advance both fundamental and applied spintronics research."