A study led by the University of Nottingham has found that differently-coiled types of Japanese land snails should in fact be considered a single species, because - against all odds - they are sometimes able to mate, a result which has implications for the classification of other snails.

Although most snails have a right-handed spiralling shell, rare 'mirror-image' individuals have a shell that coils to the left. This inherited condition has attracted attention because the genitals of so-called 'lefty' snails are on the opposite side of the head, and so it had been thought that normal 'face-to-face' mating is difficult or impossible.

But the new research by Dr Angus Davison, and Paul Richards, a PhD student in the University of Nottingham's School of Life Sciences, published in the journal Evolution Letters, has revealed instances in a Japanese snail where the two types can overcome this seemingly insurmountable barrier - by twisting their genitals to allow them to mate in a face-to-face position. The study also found evidence of this in their genetic make-up.

For many years, dextral (right-coiling) Euhadra aomoriensis and sinistral (left-coiling) Euhadra quaesita were believed to be two separate species because their mirror-image anatomy was thought to make it impossible for them to mate. However, the researchers found that the snails are sometimes able to twist their genitals into an appropriate position, and so mate in a normal face-to-face position. The common ancestry of the two types was also borne out by a comparison of the snails' genomes, or their genetic make-up, which also revealed the genetic similarities.

Dr Davison said: "We were surprised to find that different-coiled individual Euhadra snails can sometimes mate, against expectations, and that there is evidence for this in their DNA. It was previously supposed that face-to-face mating was impossible between mirror image snails. We showed that while mating - and the movement of genes - between the two types is certainly a rare event, it occurs sufficiently often that the two types should properly be considered a single species. It turns out that the mating problem is mainly behavioural, requiring a twisting of the genitals, rather than a physical incompatibility."

Collaborating scientist Professor Satoshi Chiba of Tohoku University said: "We were really surprised to find these reports from Japanese naturalists, of mating between sinistral and dextal snails, but in evolution even rare events can have quite large impacts on the underlying genes. As snails in general are sometimes classified into separate species based mainly on their shell-coiling, this work has implications for the classification of other snail species." 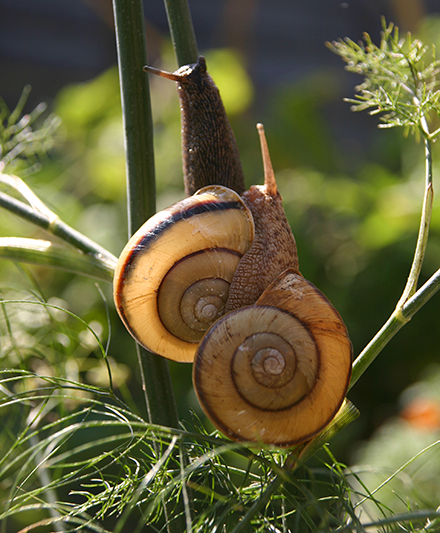 Dr Davison then said: "As it has previously been shown that the same sets of genes that make mirror image snails are also involved in making mirror image bodies in other animals - including humans - further research into the natural variation of snails could offer the chance to develop an understanding of how organs are placed in the body and why this process can sometimes go wrong."

Chiral reversal in the Japanese snail genus Euhadra presents one of the best opportunities for scientists to investigate the possibility of two species having diverged from a single ancestor. Previously, two independent studies used mitochondrial DNA sequences to investigate the evolutionary history and genetic relationships between the sinistral and dextral Euhadra species - but came up with quite different explanations.

In this new study, the researchers used their network of mollusc experts and Japanese sources to investigate the potential evidence of possible matings between these two unlikely partners, uncovering five instances of this behaviour, including one observation of mating between the two different species - sinistral E.quaesita and dextral E. senckenbergiana. They also used a more powerful method called RAD-seq to scan the DNA of sinistral and dextral individuals, which confirmed that there is movement of genes between the two types. In the future, the researchers would like to use the same methods to find the genes that make the snails mirror images, which may have implications for understanding the development of other animals, including ourselves.

Dr Davison's lab and work on these mutant snails has made international headlines after he led a public campaign to find a sinistral mate for 'lefty' snail Jeremy, in the hope he could use any potential offspring to study the inheritance of this rare condition.

The initiative has proved successful - despite a tricky start in which the potential mates who were discovered mated with each other and produced offspring. Shortly before Jeremy's recent death, the snail was able to produce offspring with mate Tomeu, which will continued to be studied at Nottingham. Tomeu has recently been preserved as part of a bid to be included in the Sanger Institute's iconic 25 Genomes project, which would potentially help to uncover the DNA blueprint for these sinistral snails.

The main part of this study was funded by a BBSRC studentship to Paul Richards, with additional funding from a BBSRC grant, the Japanese Society for the Promotion of Science, the Genetics Society, and the Daiwa Foundation.