The Molecule that Can AUTAC Bad Proteins

Tohoku University researchers have developed a strategy that could help cells get rid of disease-related debris. Further research could lead to treatments for neurodegenerative and metabolic diseases, Down syndrome, and maybe even aging-related diseases. The findings were published in the journal Molecular Cell.

Cells have a natural ability to routinely rid themselves of unnecessary or dysfunctional proteins and organelles. During this process of 'autophagy', debris are tagged with a compound called ubiquitin and then degraded within tiny cellular vacuoles. Autophagy is impaired in some cancers, and neurodegenerative and metabolic diseases, so scientists have been working to develop drugs that can regulate this process. However, little is known about the details of autophagy, such as how the cell knows which components to tag with ubiquitin.

In previous research, Hirokazu Arimoto, a chemical biologist at Tohoku University, and colleagues found that autophagy is initiated against invading streptococci bacteria when they are tagged with the nucleic acid guanine. The researchers wondered if guanine tagging could also initiate autophagy against other cellular components. 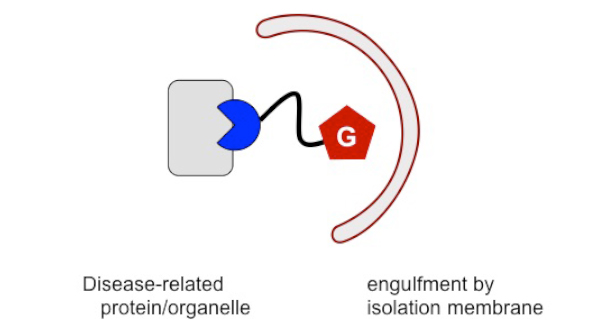 For example, they designed an AUTAC targeting a protein on the mitochondrial membrane. Mitochondrial dysfunction causes some symptoms frequently seen in Down syndrome, including heart disease, hearing loss and dementia. It also causes several diseases associated with aging.

The AUTAC successfully targeted fragmented mitochondria in cells taken from someone with Down syndrome. Not only did this accelerate their removal, it also fast-tracked the formation of new, normally functioning mitochondria. 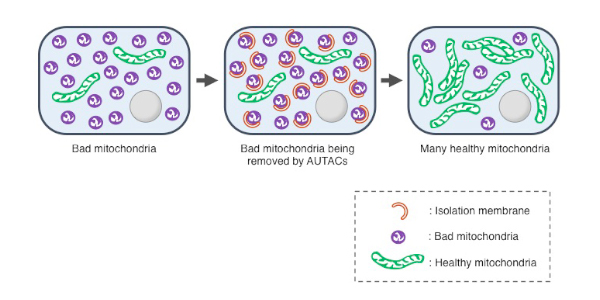 AUTAC successfully led to the removal of bad mitochondria and fast-tracked the formation of new, healthy ones. ⒸTohoku University

"AUTAC degrades its target, making it a game-changing innovation for the drug industry," says Arimoto. "Current small molecule drugs bind to molecules, like proteins, and interfere with their functions, but do not degrade them. The degradation of biomolecules gets rid of all the functions and is a more powerful method."

Arimoto and his team are now working on developing second-generation AUTAC molecules that will be at least 100 times more effective, he says.