A research group from Tohoku University has developed spintronics devices which are promising for future energy-efficient and adoptive computing systems, as they behave like neurons and synapses in the human brain.

So the development of computing schemes or hardware inspired by the processing of information in the brain is of broad interest to scientists in fields ranging from physics, chemistry, material science and mathematics, to electronics and computer science.

In computing, there are various ways to implement the processing of information by a brain. Spiking neural network is a kind of implementation method which closely mimics the brain's architecture and temporal information processing. Successful implementation of spiking neural network requires dedicated hardware with artificial neurons and synapses that are designed to exhibit the dynamics of biological neurons and synapses. 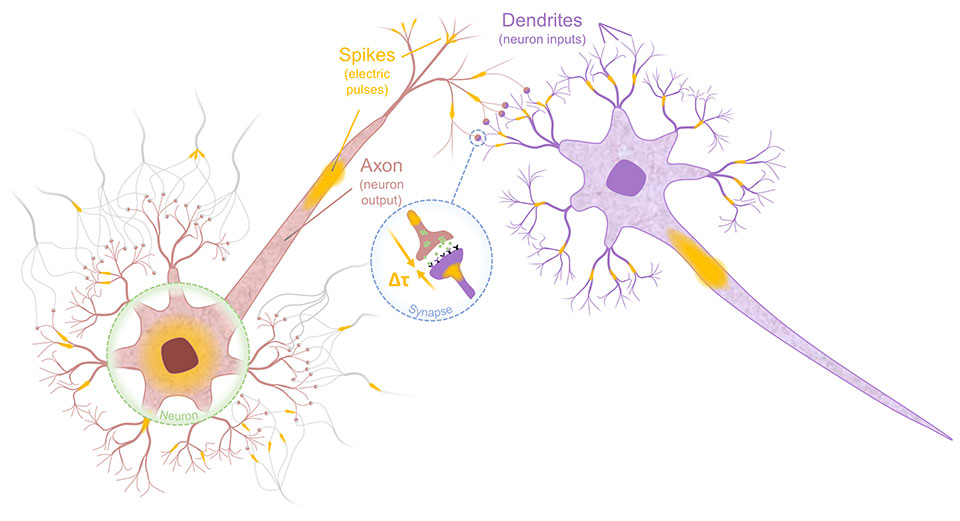 Here, the artificial neuron and synapse would ideally be made of the same material system and operated under the same working principle. However, this has been a challenging issue due to the fundamentally different nature of the neuron and synapse in biological neural networks.

The research group had previously developed a functional material system consisting of antiferromagnetic and ferromagnetic materials. This time, they prepared artificial neuronal and synaptic devices microfabricated from the material system, which demonstrated fundamental behavior of biological neuron and synapse - leaky integrate-and-fire and spike-timing-dependent plasticity, respectively - based on the same concept of spintronics.

Using the concept of spintronics, dynamics of neurons and synapses, i.e., leaky integrate-and-fire and spike-timing-dependent plasticity, respectively, are reproduced through spintronics devices made of the same material system. ⒸAleksandr Kurenkov and Shunsuke Fukami

The spiking neural network is known to be advantageous over today's artificial intelligence for the processing and prediction of temporal information. Expansion of the developed technology to unit-circuit, block and system levels is expected to lead to computers that can process time-varying information such as voice and video with a small amount of power or edge devices that have the an ability to adopt users and the environment through usage.