A research group comprising members from Tohoku University, Hokkaido University and the University of Tokyo have developed a high-resolution radiocarbon dating method that can accurately date tsunami deposits, offering a vital window into past disasters and enabling scientists to better understand how frequently tsunamis occur.

Tsunami deposits offer scientists important information on tsunamis that struck before records began. They reveal the frequency and size of tsunamis. But sometimes the sediment has been washed away or is incomplete.

The 2011 Great East Japan Earthquake and Tsunami thrust the Tohoku region into the international spotlight. Yet the area has been prone to earthquakes and tsunamis throughout its history.

Still, scientists are divided on what tsunamis reached the Sanriku Coast - the stretch of northeastern coastline along present day Iwate and parts of Aomori and Miyagi. Inconclusive data rendered scientists unable to determine whether sediments from the Sanriku Coast belong to the 1611 Keicho Oshu Tsunami or the 1454 Kyotoku Tsunami.

Tohoku University assistant professor Takashi Ishizawa, who led the research group, and his team applied their radiocarbon dating method to a village situated in Iwate Prefecture.

"The village of Noda is strategic for two reasons," says Ishizawa. "Tsunami deposits formed between the 14th and 17th centuries have been preserved there, and Noda has inland areas where only giant tsunamis are capable of inundating." 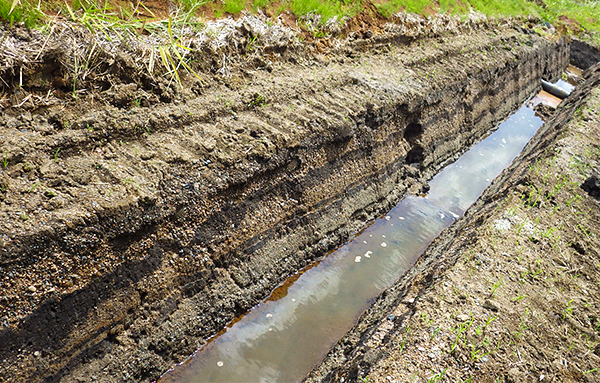 Traces of paleotsunami at the lowland of the Ube River, Noda Village. The Sanriku Coast has been hit by tsunamis throughout its history, leaving behind tsunami deposits. ©Takashi Ishizawa et al.

Analyzing the data, in addition to comparing the tsunami records from the surrounding area, the researchers determined that sediment belonged to the 1611 Keicho Oshu Tsunami, not the 1454 Kyotoku Tsunami.

Moreover, they found the prevalence of giant tsunamis since the 1611 Keicho Oshu Tsunami occurred at intervals between 100 to 200 years.

Ishizawa and his team are looking to apply this method to other locations, including the Sendai Plain to reconstruct a more reliable history of tsunamis along the entire Japan Trench.

Details of their research were published in the journal Quaternary Science Reviews on February 2, 2022.