Researchers in Japan have identified the first spontaneous mutant coral symbiont alga to not maintain a symbiotic relationship with its host.

They have devised a system in which the simple addition or depletion of a nutrient can experimentally switch the symbiosis on and off. The mutant symbiont alga enables development of a genetic transformation system, which will be a powerful tool for studying coral-algal endosymbiosis.

Coral reefs are a major reservoir of biodiversity in the sea. The ecosystem relies on a stable symbiotic relationship between the host cnidarian animals, including corals and sea anemones, and the symbiont dinoflagellate. Ongoing environmental changes due to global warming can collapse the symbiosis: a phenomenon known as 'coral bleaching.' In addition, mechanisms for maintaining stable symbiosis are poorly understood, partly due to a lack of research tools. 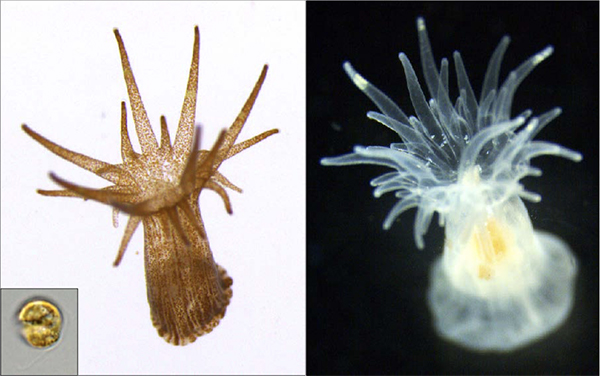 'First we established an efficient method for culturing dinoflagellate cells in our lab,' said Shinichiro Maruyama, an assistant professor at Tohoku University. 'Then we cultured the cells in the presence of various drugs and screened for spontaneous drug-resistant mutants to isolate clones useful for symbiosis experiments.'

Symbiosis experiments using a mutant algal strain isolated in this study. The addition of a nutrient can lead to symbiosis (modified from Ishii et al.)

The mutant deficient of uracil - a basic compound of nucleic acid - appeared to have lost the ability to maintain symbiosis with the model organism sea anemone.

This indicates that the simple addition or depletion of the nutrient can be used as a switch for controlling symbiosis.

As a next step, the team aims to introduce genetic mutations that are capable of reversing uracil deficiency in the mutant dinoflagellate, which may provide clues for identifying algal genes responsible for symbiosis. The fundamental technology they have developed is expected to drive molecular research of the coral-algal symbiosis.