Optogenetics is a new method that uses light to control neurons that have been genetically modified to be light sensitive. It has revolutionized neuromodulation, allowing researchers to activate or inhibit neuronal cells within living animals; thus, controlling their behaviors.

Using this method, researchers from the National Institute for Physiological Sciences and Tohoku University have succeeded in inducing arm movements in Japanese macaque monkeys and will publish their results in Nature Communications on June 29.

Until now, most successful optogenetic studies have been carried out on rodents. Barring a few studies targeting eye movements, trials seeking to modify behaviors in monkeys have failed.

The research team, led by Professor Atsushi Nambu and Professor Hajime Mushiake, first developed an adeno-associated viral vector - a tool that delivers genetic materials into cells. The team then injected the viral vector, which expressed a light-sensitive protein called channelrhodopsin, into the arm region of the motor cortex where electrical stimulation induces arm movements.

The team also developed an optrode that can record neuronal activity while applying light and electrical stimulation separately. The optrode was inserted into the motor cortex, and light stimulation was applied. 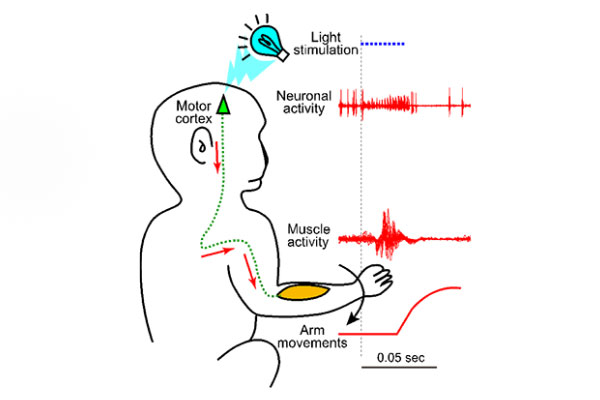 Professor Mushiake, from Tohoku University, noted that the study has opened the door to optogenetic studies in non-human primates and clinical applications in human patients. "This is one of the few successfully optogenetic studies to be carried out in Monkeys." He adds, "The next phase of our research is the therapeutic application of light-induced brain activation to various neural diseases. We are currently working on improving the efficiency of light-induced activation in collaboration with medical engineering."