Researchers at Tohoku University have discovered a new plasma wave phenomenon, leading to the development of a negative ion source for fusion plasma heating.

Led by Associate Prof K. Takahashi and Prof A. Ando, the team demonstrated adjoining generations of high and low electron temperature plasmas, based on the presently discovered plasma wave physics.

Development of neutral beam injection (NBI) heating system utilizing a hydrogen/deuterium (H/D) negative ion source, is significant for a fusion plasma reactor, which is one of the potential solutions to future energy-resource problems. A very high temperature plasma state above 1.2 hundred billion degrees C (>10 keV) has to be sustained to maintain the fusion reaction; the NBI system plays an important role in heating the plasma. Once the negative ions are produced in a low-temperature plasma source, they are extracted electrostatically as an energetic beam. The negative ions are then neutralized via a gas neutralizer system and injected into the magnetically-confined plasma core. 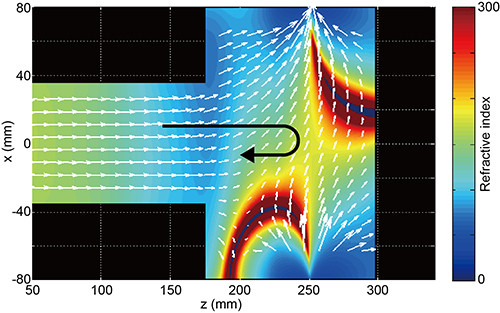 The researchers found that the radiofrequency wave for the plasma production, called a helicon wave, is reflected by a local change of the refractive index (contour plot in Fig), which is introduced by the rapidly bent magnetic field structure (white arrows in Fig). Although there is no axial physical boundary downstream of the source, the wave recognizes the bent magnetic field structure as the boundary and is reflected there (black arrow in Fig).

The experiment has just started and currently only shows the low temperature plasma production; the detailed investigations on the negative ion production and the beam extraction will be progressed hereafter. The above-mentioned plasma source based on the wave physics will provide various applications for plasma processing devices, in addition to the application to the negative ion source.