By studying the sexual behavior of a mutant strain of fruit fly called "platonic," researchers at the Tohoku University Graduate School of Life Sciences have found parallels between humans and flies in the neural control of copulation.

As the name suggests, male and female platonic-mutant flies (Drosophila) actively interact but do not copulate. And the researchers now believe they know why.

"The fly genome is composed of some 15,000 genes," says Professor Daisuke Yamamoto. "And we've discovered that the impairment of just one gene, known as scribbler, could render the platonic mutants unable to copulate."

According to the study, this scribbler gene is required during a fly's nymphal stage in order for eight essential nerve cells to survive. These nerve cells will go on to play a big role in the execution of the copulation motor program when the fly reaches adulthood. This is because the scribbler gene produces a protein that supports the functions of the Bone Morphogenetic Proteins (BMPs), which are crucial for the development of a variety of tissues and sexual traits in many animal species. 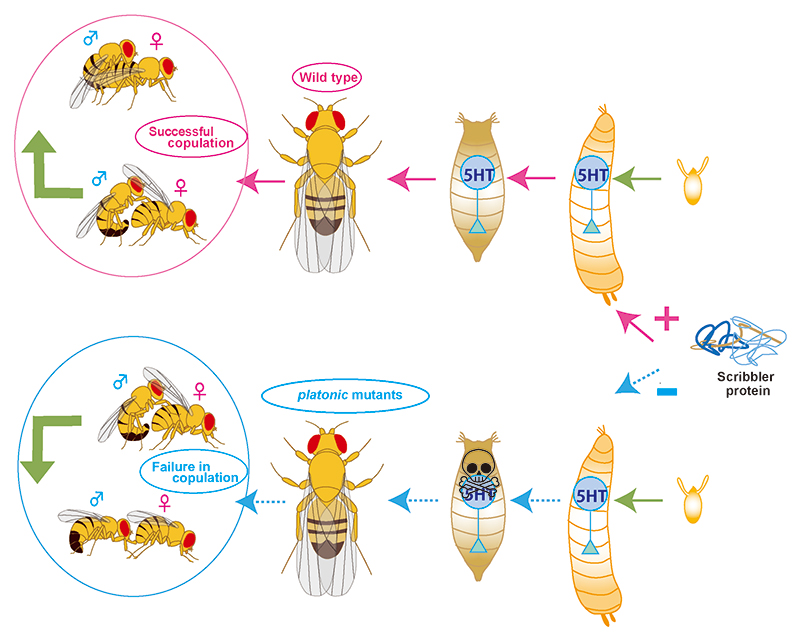 Deficiency of Scribbler protein in developing platonic mutants results in the death of serotonin-producing cells, which, in turn, impairs copulation ability in adult males

In humans, BMPs have been used for tissue-regeneration therapies. The eight nerve cells that are lost if the scribbler gene is disrupted, are important because they synthesize the neurotransmitter, serotonin. Serotonin is known commonly as a motivation booster which may also increase sexual urges in humans and mammals in some circumstances. There is, however, a side effect. While serotonin is sometimes taken as a drug to create a positive mood, it can also cause erectile dysfunction in the long run.

The researchers conclude that there are interesting parallels between humans and flies in the way they both require BMP signaling for tissue development and serotonin to regulate sexual activity. They believe that their study can provide insights into the evolutionary conserved mechanism for courtship and copulation, and possibly lead to the development of new, more effective drugs.