Japanese scientists have found a new way to successfully detect the efficiency of crystal semiconductors. For the first time ever, the team used a specific kind of photoluminescence spectroscopy, a way to detect light, to characterize the semiconductors. The emitted light energy was used as an indicator of the crystal's quality. This method potentially culminates in more efficient light-emitting diodes (LEDs) and solar cells. Additionally, it could usher in several other advances in electronics.

The research, published in APL Materials on July 31, 2019, involves crystals called lead halide perovskites - unique types of materials with structures efficient for solar cell performance. The crystals consist of an organic material interlocked with an inorganic one. Perovskites are semiconductor materials that have many applications. They are more efficient and much easier and cheaper to make than standard commercial solar cells.

Furthermore, these promising crystals could also lead to new electronic displays, sensors and other devices that are activated by light, bringing increased efficiency at a lower cost to manufacturers of optoelectronics that harness light. In addition, these crystals have the potential to harvest solar energy. Most solar cells are made with silicon crystals, a relatively straightforward and effective material to process. However, perovskite-based devices are likely to offer higher conversion efficiencies than silicon.

"For further development of perovskite-based devices, it is essential to quantitatively evaluate the absolute efficiency in high-quality perovskite crystals without assuming any predefined physical model is of particular importance," said corresponding author Kazunobu Kojima, Associate Professor at Tohoku University, Japan. "Our method is new and unique because previous methods have relied on efficiency estimation by model-dependent analyses of photoluminescence."

Understanding photoluminescence is important for designing devices that control, generate or detect light, including solar cells, LEDs and light sensors. So far, these detections have largely relied on theoretical modelling as a way to predict the efficiency of perovskite-based semiconductors. For this research, the authors have implemented a technique they originally proposed in 2016 called Omnidirectional Photoluminescence Spectroscopy or "ODPL spectroscopy." The procedure is a contactless, nondestructive method of probing the electronic structure of the crystals from all directions, enabling them to easily and quickly quantify the crystals' properties. 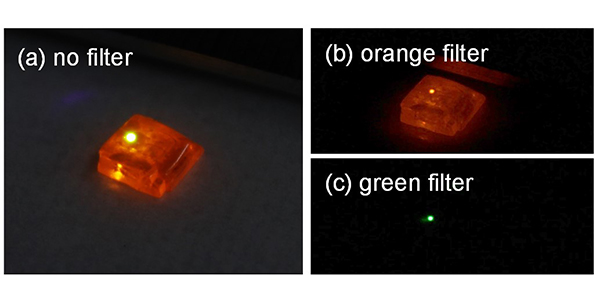 An important next step is to implement ODPL spectroscopy to investigate different types of perovskite materials. This may lead to better understanding of crystal-based semiconductors as well as more efficient ones. The authors state that their future studies will focus on both increasing crystal efficiency and ensuring that it is unified across all areas of materials.