Radiation that knocks electrons out and down, one after another

Researchers are investigating novel ways by which electrons are knocked out of matter. Their research could have implications for radiation therapy.

Exposing a small cluster of neon atoms to a very short and intense burst of extreme ultraviolet light initiates a novel mechanism that produces a large number of electrons and ions.

A team of researchers led by physical chemist Kiyoshi Ueda of Tohoku University used a free electron laser (FEL) at Japan's SPring-8 Compact SASE Source test accelerator to investigate how electrons are 'knocked out' of neon atom clusters. Intense extreme ultraviolet FEL pulses were directed at the clusters and the resultant energy distribution of electrons knocked out of the clusters was measured using a 'velocity map imaging spectrometer'. 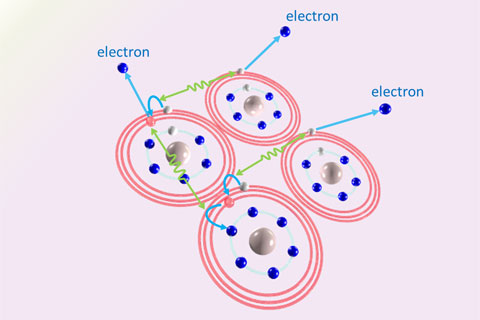 Scientists have elucidated a surprising novel mechanism of cascading electron emission caused by the Coulombic interaction between highly excited atoms.

Electrons inside a material absorb energy when the material is exposed to light. Normally, this energy is used to 'knock electrons out' of the material. This can only happen, however, if the energy of the light particle, or 'photon', absorbed by the electron is higher than the amount of energy needed by the material, or its 'work function', to eject the electron. In 1921, Albert Einstein won a Nobel Prize for describing this 'photoelectric effect'.

The team tested what would happen when they set the photon energy of the FEL light below the work function of clusters of neon atoms. Instead of being knocked out, when an electron tightly bound to a neon atom absorbs the lower energy photon, it becomes loosely bound, causing the atom to become 'excited'. Since the FEL pulse is so intense, many electrons become loosely bound in the clusters at the same time; meaning many atoms become excited. Electrons are then knocked out of the clusters even though the photon energy is below their work function.

The team discovered that loosely bound electrons are knocked out of the clusters in a novel 'cascading' process.

"The cascades of knocking electrons out and down produce more electrons and more ions, damaging the sample more. I am convinced these cascades might play a crucial role in future radiation therapy," says Lorenz Cederbaum of Germany's Heidelberg University, one of the study's co-authors.

The release of low-energy electrons exposed to intense light can damage DNA. This concept is used in cancer radiation therapy. The findings could have implications for the use of radiation therapy in the future.

The researchers published their findings in the journal Nature Communications.