Researchers identify a treatment for a rare bone loss disorder that might also lead to help for aging brittle bones.

A possible 'first-line' treatment for a rare bone loss disease has been identified by a research team led by Tohoku University in Japan. The research findings, published in the journal Molecular Cell, could also provide insight into treating age-related osteoporosis.

Hajdu-Cheney syndrome is a rare genetic disease that leads to severe osteoporosis and developmental defects, including the reabsorption of bones in the hands and feet. The disease is associated with mutations in a particular gene, called NOTCH2, which codes for proteins involved with bone maintenance. The NOTCH2 proteins usually help balance destruction and construction essential for bone maintenance and repair. Mutations associated with Hajdu-Cheney syndrome upset that balance, but the exact mechanisms causing bone resorption have not been well understood.

Now, through a series of detailed tests, molecular biologist Hiroyuki Inuzuka and his colleagues have worked out the specific molecular pathway that results in Hajdu-Cheney syndrome. 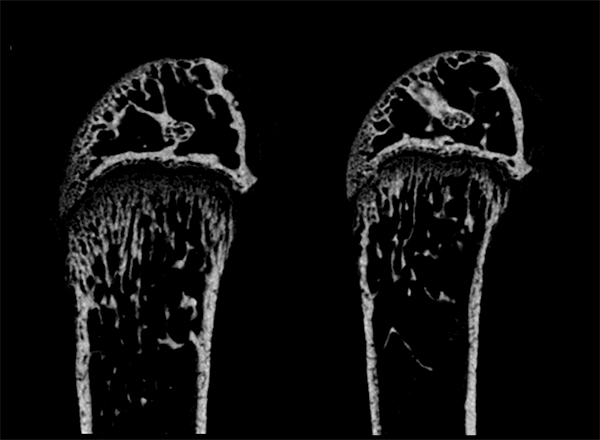 A computed tomography image shows more bone breakdown in the femur of a mouse with Fbw7 gene knocked out similar to people with Hadju-Cheney syndrome (right) compared to control mice (left).

They found that this particular NOTCH2 mutation does not maintain normal NOTCH2 protein abundance, with the help of another protein, called FBW7. To discover this, the researchers knocked out the gene for Fbw7 in the bones of mice. Without the gene and resulting protein, the mice had severe osteoporosis, much like people with Hajdu-Cheney syndrome -- indicating that FBW7 is the primary regulator of this system.

They further determined that in humans with Hajdu-Cheney syndrome, the FBW7 protein was unable to bind to NOTCH2 proteins because the binding spot is missing in osteoclasts. This mutation allows the osteoclasts to over-operate, breaking down too much bone tissue.

The researchers were able to reverse bone loss in the knock-out mice with the elevated NOTCH2 by giving them a medication that blocks osteoclast formation. They tried several different treatments, including a chemical compound called DAPT that was particularly effective. DAPT has been shown to help with osteoarthritis by inhibiting function of NOTCH proteins in other studies. Using DAPT as well as Zoledronic acid, a common medication for osteoporosis, "may become a first-line treatment for Hadju-Cheney syndrome," the researchers conclude in their study.

"By clearly identifying the relationship between FBW7 and NOTCH2 proteins, we have identified potential therapeutic targets for patients with rare bone diseases as well as much more widespread age-related osteoporosis," said Inuzuka.