Researchers at Tohoku University have developed a novel strategy for controlling chirality of single-walled carbon nanotubes (SWNTs). By using this approach, preferential synthesis of (6,4) SWNTs has been realized for the first time. The unique growth mechanism has been elucidated through comparing experiments and theoretical calculations made with a researcher from the University of Tokyo.

Chirality-selective synthesis of single-walled carbon nanotubes (SWNTs) has been a research goal for the last two decades and is still challenging due to the difficulty in controlling the atomic structure in the one-dimensional material.

Led by Associate Professor T. Kato, the team demonstrated predominant synthesis of (6,4) SWNTs by tuning the oxidation degree of the Co catalyst. The detailed mechanism is investigated through a systematic experimental study combined with first-principle calculations, revealing that the independent control of tube diameter and chiral angle achieved by changing the binding energy between SWNTs (cap and tube edge) and catalyst causes a drastic transition of chirality of SWNTs from (6,5) to (6,4). 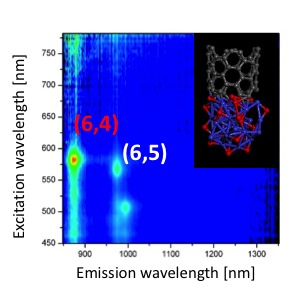 "Since our approach of independently controlling the diameter and chiral angle can be applied to other chirality species, our results can be useful in achieving the on-demand synthesis of specific-chirality SWNTs. This is necessary for the practical use of SWNTs-based future devices such as ultra-high performance transistors, electrical and optical memories, and various sensor applications," says Kato.

"High purity synthesis of (6,4) SWNTs can contribute to pushing the study of SWNTs to industrial - especially optoelectrical - applications due to the largest band gap and highest quantum yields of (6,4) SWNTs."

Details of this study were published online on September 11 in Scientific Reports.