The Discovery of a Star with Peculiar Chemistry

How the Milky Way Galaxy formed is one of the most important questions in astronomy. Despite observational and theoretical efforts in the last several decades, the detailed process of the Milky Way's formation remains a mystery. Chemical composition in the atmosphere of ancient stars is the most important fossil record of the Milky Way formation because the composition is almost entirely preserved for the lifetime of a star. The international team of astronomers from National Astronomical Observatories of China, National Astronomical Observatory of Japan, University of Hyogo, and Tohoku University (University of Tokyo at the time of discovery) have collected star candidates showing an interesting chemical composition based on the LAMOST survey project. The team used High Dispersion Spectrograph (HDS) on the Subaru Telescope to measure the detailed chemical composition of these stars. With a careful analysis of the obtained spectra, the team found that one star, J1124+4535, shows a high magnesium-to-iron abundance ratio along with a high Europium*4-to-iron abundance ratio (Fig1). The two abundance ratios are clearly distinct from those found in any other similarly old stars in the Milky Way. Instead, the observed ratios closely resemble stars in nearby dwarf satellite galaxies. 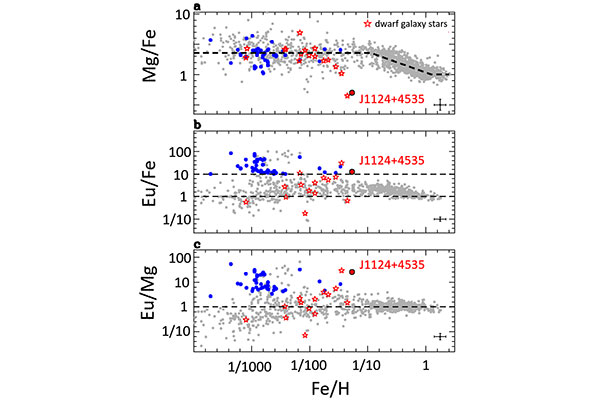 Based on the remarkable similarity in the chemical composition, the team concluded that this star was originally born in a dwarf galaxy. At some point, it then entered the Milky Way Galaxy. In other words, the presence of such a star in the Milky Way strongly supports a scenario that the Milky Way Galaxy was formed, at least in part, through the mergers of dwarf galaxies.

The team is planning to observe many more ancient stars in the Milky Way to gain further insights into how many and what kinds of dwarf galaxies merged to build up the Milky Way.