This new technology will be especially useful in the safety inspection of extradosed and other types of bridges that use PC steel wires hidden inside external cables covered by resin jackets. (see title image)

External cables are important structural elements for dispersing loads in extradosed bridges and they have extremely high levels of safety with regard to corrosion. This is due to the fact that they are protectively covered in polyethylene resin or similar resins. (see fig. 1 and 2) 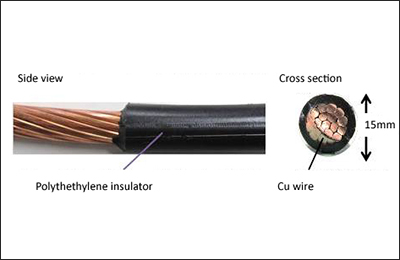 Fig.2
This sealed structure is similar to that of insulated electric conductive cable with Cu or Al bundled wires. We have already reported that the THz imaging can visualize the invisible inner conductive wire without pealing the outer insulating resin. THz imaging can inspect the broken parts and/or corroded wires inside the insulator.

Destructive inspections, in which the outer coating is removed from the cable, run the risk of water and other forms of moisture penetrating the wires and causing corrosion after the inspection has been completed.

This enables non-destructive imaging of the inside of PC steel wire to be carried out without removing the external resin cover by making use of the terahertz wave characteristics that efficiently reflect metal surfaces within the resin. (see fig. 3 and 4) 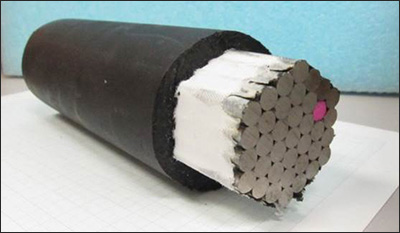 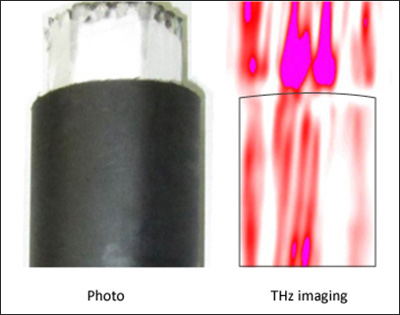 Fig.4
THz imaging of PC steel cable corresponding to the sealed and unsealed parts of the cable. Polyethylene outer mold was partially removed.

The team also found that contrary to the radioactive rays conventionally used for non-destructive detection purposes, the new terahertz waves have no adverse effects on the human body.

Part of the results of this research was first announced at the 2015 CLEO (Conference on Lasers and Electro-Optics) Pacific Rim Conference held in Busan, South Korea, in August.