Roughly 40 years ago, the arrival of plasma wave electronics opened up a wealth of new opportunities. Scientists were fascinated with the possibility that plasma waves could propagate faster than electrons, suggesting that so-called "plasmonic" devices could work at THz frequencies. However, experimental attempts to realize such amplifiers or emitters remained elusive.

"Our study explored THz light-plasmon coupling, light absorption, and amplification using a graphene-based system because of its excellent room-temperature electrical and optical properties," said Professor Otsuji who is based at the Ultra-Broadband Signal Processing Laboratory at Tohoku University's Research Institute of Electrical Communication (RIEC).

The research team, which consisted of members from Japanese, French, Polish and Russian institutions, designed a series of monolayer-graphene channel transistor structures. These featured an original dual-gathering gate that worked as a highly efficient antenna to couple the THz radiations and graphene plasmons. 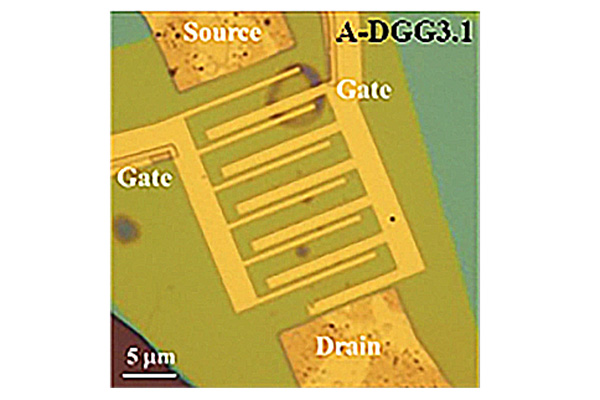 A scanning-electron microscopic top-view image of a fabricated graphene transistor structure under measurement. It features the unique transistor electrode structure called "double-grating gate," where two sets of gate electrodes that have a comb-like grating shape are prepared and arranged in an interdigitated fashion.ⒸTohoku University

Using these devices allowed the researchers to demonstrate tunable resonant plasmon absorption that, with an increase in current, results in THz radiation amplification. The amplification gain of up to 9% was observed in the monolayer graphene--far beyond the well-known landmark level of 2.3% that is the maximum available when photons directly interact with electrons without excitation of graphene plasmons.

To interpret the results, the research team used a dissipative plasmonic crystal model, capturing the main trends and basic physics of the amplification phenomena. Specifically, the model predicts the increase in the channel dc current that drives the system into an amplification regime. This indicates that the plasma waves may transfer the dc energy into the incoming THz electromagnetic waves in a coherent fashion. 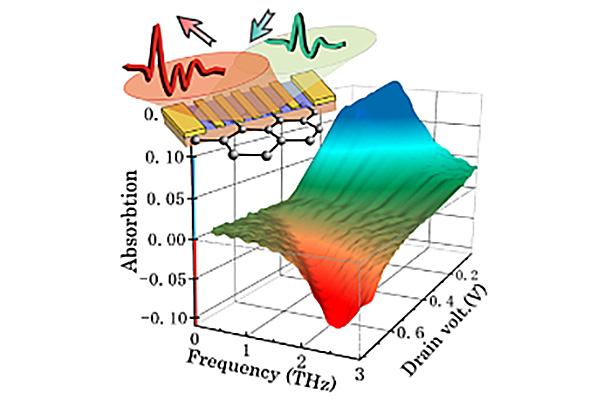 Measured absorption/amplification spectra of the device response to the terahertz pulse wave radiation. The terahertz wave pulse was emitted while increasing the drain voltage of the prototype graphene transistor. Absorption characteristics (frequency spectrum) of the graphene transistor, in relation to the incident pulse wave, were obtained from the time response waveform of the transmitted pulse wave. When the drain voltage is above a certain threshold value, an amplification characteristic (a negative absorption) with the maximal gain of 0.09 (9%) was obtained.ⒸTohoku University

"Because all results were obtained at room temperature, our experimental results pave the way toward further THz plasmonic technology with a new generation of all-electronic, resonant, and voltage-controlled THz amplifiers," added Professor Otsuji.