Investigations in mice have identified molecular processes that could be explored as targets for treatment of heart failure with pulmonary hypertension.

Two related enzymes have opposing roles in mouse heart muscle cells exposed to pressure overload, according to a recent study published in the Proceedings of the National Academy of Sciences, USA. This finding furthers understanding of pulmonary hypertension that has developed as a result of heart failure.

Heart failure affects an estimated 26 million people worldwide. It is a condition in which the heart's muscular wall becomes weak and unable to efficiently pump blood into the general circulation. This causes a build-up of blood, and thus pressure, in the heart's chambers. This leads to further damage and build-up of blood pressure within the vessels entering and leaving the lungs, a condition known as pulmonary hypertension.

Understanding the molecular changes that occur during this process could lead to the development of drugs that improve heart failure with pulmonary hypertension. 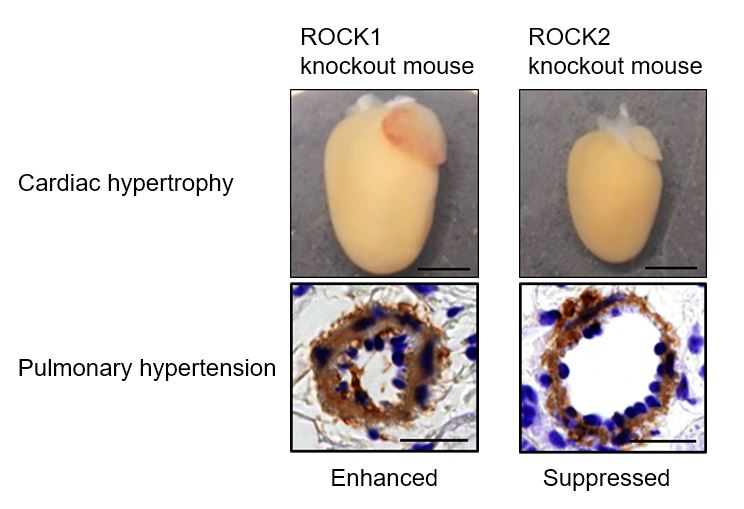 Opposite roles for ROCK1 and ROCK2 in Pulmonary hypertension with heart failure in mice. Copyright: Tohoku University.

A team of scientists at Tohoku University in Japan investigated the roles of two molecules, ROCK1 and ROCK2, in heart failure with pulmonary hypertension. The molecules belong to a family of enzymes known for their roles in cellular functions such as contraction, motility, proliferation and natural cell death.

The scientists generated two types of mice in which the genes that code for ROCK1 or ROCK2 in cardiac muscle cells were turned off. Then, they constricted the ascending part of the aorta, the main vessel that leaves the left ventricle of the heart and distributes blood to the rest of the body. This caused chronic pressure overload and thus heart failure. For comparison, the team also restricted the ascending aorta in a control group of wild-type mice with normal levels of ROCK1 and ROCK2 in their cardiac muscle cells.

The team combed through compound databases to look for potential drugs that could target the ROCK2 pathway. They found that a chemical, called celastrol, suppresses the expression of cyclophilin A and basigin in the heart and lungs. Celastrol has been reported to have beneficial effects in some inflammatory conditions like rheumatoid arthritis. Suppressing cyclophilin A and basigin with celastrol in the mice improved their heart failure and pulmonary hypertension.

Further studies are needed to identify celastrol's molecular and cellular targets and thus its potential in the treatment of heart failure, the researchers conclude.