Upper and lower plate controls on the 2011 Tohoku-oki earthquake

Researchers at Tohoku University's Department of Geophysics, have been studying the great Tohoku-oki earthquake which occurred on March 11, 2011, to the east of Japan's Honshu Island (Fig. 1). 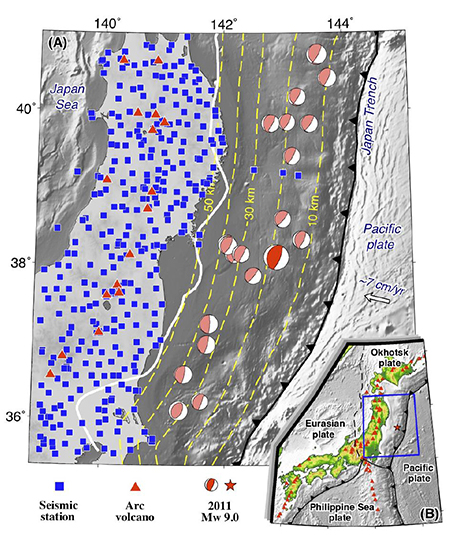 The earthquake, which registered with a moment magnitude (Mw) of 9.0, was the most powerful earthquake ever recorded in Japan, and the fourth most powerful earthquake in the world since modern record-keeping began in 1900. It triggered powerful tsunami waves causing over 18,000 causalities. The tsunami caused nuclear accidents at the Fukushima Daiichi Nuclear Power Plant, and subsequent evacuations affected hundreds of thousands of residents. This earthquake has attracted great interest among researchers, because few experts expected such a large earthquake would occur in that area.

In Northeast Japan (Tohoku), the Pacific plate is subducting northwestward beneath the Okhotsk plate, causing the 2011 Tohoku-oki earthquake. Subduction is a process where one of Earth's tectonic plates sinks under another. To date, many researchers have investigated the causal mechanism of the Tohoku-oki earthquake, and a key question has arisen: Which plate controlled this huge earthquake? The upper Okhotsk plate or the lower Pacific plate? There have been conflicting results, because the detailed structure in and around the source zone is still unclear.

The Tohoku University team, comprising Dapeng Zhao and Xin Liu (now at Ocean University of China), applied a method of seismic tomography*1 to over 144,000 P-wave arrival-time data recorded by the dense Japanese seismic network (Fig. 1) to determine a high-resolution tomography beneath the Tohoku-oki region (Fig. 2). They also used seafloor topography and gravity data to constrain the structure of the source zone. 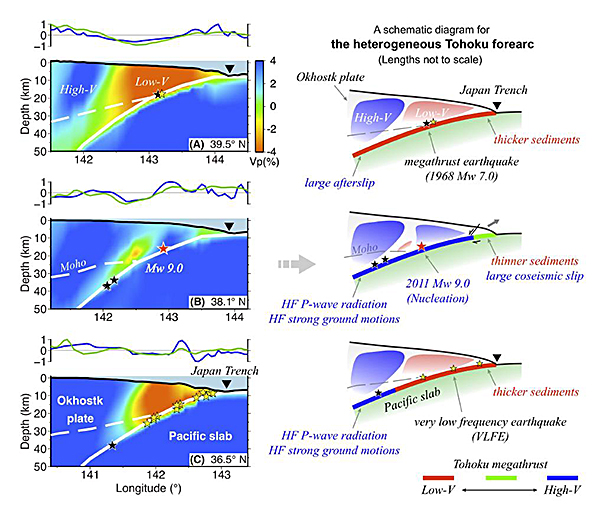 Fig. 2. East-west vertical cross-sections of Vp tomography (left) and corresponding cartoons (right) along three profiles (A) off Iwate Prefecture, (B) off Miyagi Prefecture, and (C) off Fukushima Prefecture. Normalized residual topography (blue line) and gravity (green line) are shown atop each cross-section. Red and blue colors denote low and high Vp perturbations, respectively, whose scale is shown beside (A). White bold and dashed lines denote the upper boundary of the subducting Pacific plate and the Moho discontinuity, respectively. The red star: the 2011 Tohoku-oki earthquake (Mw 9.0). Black and yellow stars denote other megathrust earthquakes (Mw 7.0~8.0) during 1917-2017 and very low frequency earthquakes (VLFEs) within a 40 km width of each profile, respectively. The reverse triangle: the Japan Trench. In the right panels, the red, green and blue lines denote low-, normal- and high-Vp anomalies atop the subducting Pacific plate, respectively. HF: high-frequency. Copyright: Dapeng Zhao

Seismic tomography is an effective tool for investigating the three-dimensional (3-D) structure of the Earth's interior, in particular, for clarifying the detailed structure of large earthquake source areas. Using this method, the team received clear 3-D images of the Tohoku-oki source zone (Fig. 2), and showed that the 2011 Tohoku-oki earthquake occurred in an area with high seismic velocity in the Tohoku megathrust zone*2. This high-velocity area reflects a mechanically strong (hard) patch which was responsible for the 2011 Tohoku-oki earthquake. This hard patch results from both granitic batholiths*3 in the overriding Okhotsk plate and hard rocks atop the subducting Pacific plate (Fig. 2).

These results indicate that structural anomalies in and around the Tohoku megathrust originate from both the upper Okhotsk plate and the lower Pacific plate, which controlled the generation and rupture processes of the 2011 Tohoku-oki earthquake. This huge earthquake was caused by collision of harder rocks in both the upper and lower plates. This work sheds new light on the causal mechanism of megathrust earthquakes. It also suggests that the location of a future great earthquake may be pinpointed by investigating the detailed structure of the megathrust zone.

Notes:
*1 Seismic tomography: A method to image the three-dimensional structure of the Earth's interior by inverting abundant seismic wave data generated by many earthquakes and recorded at many seismic stations.

*2 Megathrust: A great thrust fault where a tectonic plate subducts beneath another plate. The lower plate is called subducting plate, and the upper one is called overriding plate. In Tohoku, the upper and lower plates are the Okhotsk and Pacific plates, respectively.

*3 Granitic batholith: A batholith is a large mass of intrusive igneous rock, larger than 100 square kilometers in area, that forms from cooled magma deep in the Earth's crust. Granitic batholiths are much harder than other rocks such as sedimentary materials.

Acknowledgements:
The authors wish to thank the data centers of the Japanese Kiban Seismic Network for providing the high-quality arrival-time data used in this study. This work was supported by research grants from the Japan Society for the Promotion of Science (Kiban-S 23224012) and Japanese Ministry of Education, Culture, Sports, Science and Technology (grant No. 26106005).