Walking is one of our most natural, daily actions. Now, a new study led by a Tohoku University researcher suggests that walkers use step synchronization as a form of nonverbal social communication. The results lend credence to the effects of psychological traits on movement interaction between humans.

In order to conduct the study, researchers divided participants into groups. In total, ten single-gender groups were formed - five female and five male. Group members took turns being paired up with other members, and they walked together along a quiet, barrier-free path. They wore voice recorders, and motion sensors disguised as GPS devices recorded their walking movements. 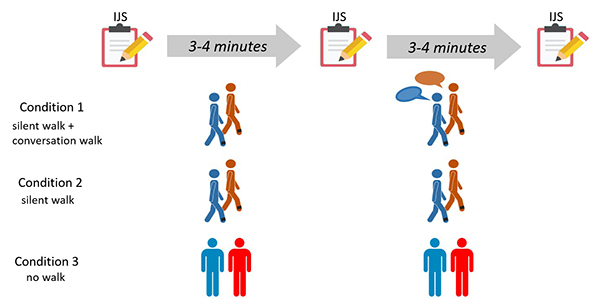 Two walkers, meeting for the first time, walked together and rated their impression of each other before and after each walk. Condition 1 participants first walked in silence, and talked on the walk back. Condition 2 participants continued to walk in silence after rating each other at the midway point. Condition 3 participants completed a questionnaire together in a quiet room, ultimately not walking together. ⒸChia-huei Tseng 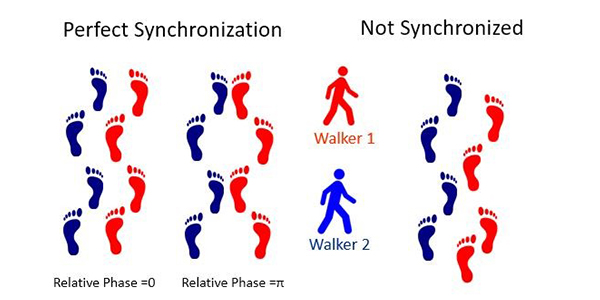 The participants' footsteps are recorded with motion sensors which are used for step synchronization analysis. ⒸChia-huei Tseng

The footstep synchronization is calculated based on a physics model (Winfree- Kuramoto model). More details are available at an earlier study by the same authors (Cheng, Kato, Tseng (2017) PLoS ONE) ⒸChia-huei Tseng

The results revealed an increase in the impression ratings for the two groups of participants who walked together, but not for the group of participants who simply spent time together. This suggests that walking side-by-side, even without verbal communication, is sufficient to alter the social relation between two strangers. Results also showed that conversations further enhanced impressions for participants who were allowed to talk. Ultimately, the experiment successfully dissociated the contribution of verbal communication from walking step synchronization, which was inseparable in previous studies. 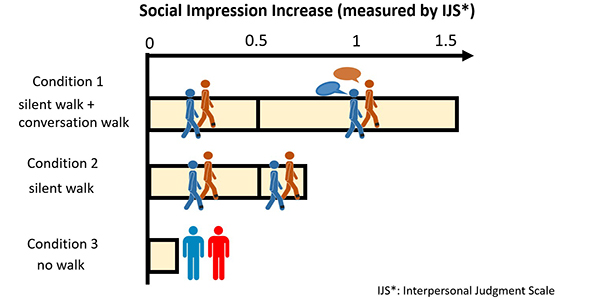 The researchers also found that pairs with a better first impression had greater synchronization in their steps - particularly for female participants. In addition to social relation, personal traits are also important. Female pairs, compared to male pairs, exhibited higher walking synchrony in this experiment. There is also an age effect - older participants tend to synchronize with their partners more in walking. Participants with lower autistic tendencies synchronize better than pairs of higher autistic tendencies. 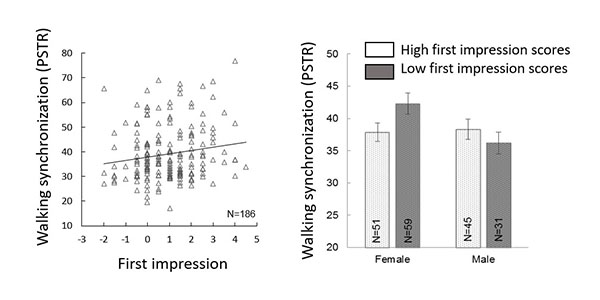 Female participants with better first impression will have a higher step synchronization with their assigned walking partner. ⒸChia-huei Tseng 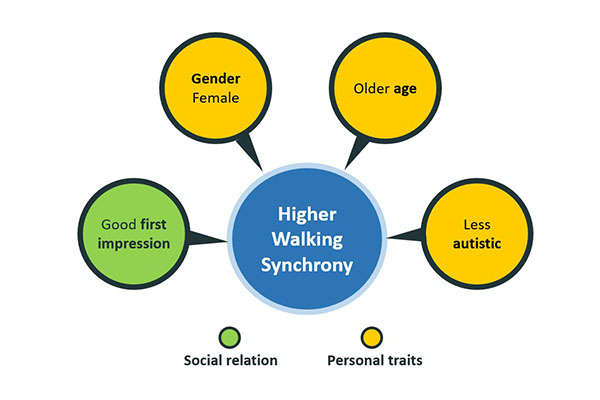 "It is very surprising for us to discover that a person's traits and our first impressions are reflected in the subtle action of walking. I think most people are not even aware that their steps are synchronized with other people as they walk," said Dr. Chia-huei Tseng, an associate professor at the Research Institute of Electrical Communication (RIEC) at Tohoku University. "It was previously known that a person's physical parameters such as height and weight affect how their movements interact with others. Now we know psychological traits also have an effect."

"There is a growing awareness of the validity of interpersonal interaction research in realworld scenarios, but daily natural environments are rich in their contextual information, making experiment control a challenge," said Dr. Miao Cheng, a post-doc researcher at NTT Communication Science Laboratories. "Our study is important because it is an approach to make the most use of an ecological paradigm while using scientific experimental method to control possible confounding variables to examine the function of implicit body synchrony."