Researchers at Tohoku University, in collaboration with researchers from the Indian Institute of Technology (IIT) Kanpur, have discovered the working mechanism of an important class of drug target receptor proteins.

Cells in our body are surrounded by a thin layer of lipid membrane that harbors embedded protein molecule receptors. These receptors work as molecular messengers because they receive the signal on the outside of the cells, and then transmit the message to the inside. This allows the cells to trigger specific responses and initiate the corresponding physiological process in our body.

Some receptors present in the cell membrane have been classified as "silent" or "non-functional" receptors. These receptors do not appear to act like similar receptors in our body. An example investigated in the current study is a receptor for a complement peptide in our blood called C5aR2.

Complement C5a plays a critical role in our body's immune response. It binds to, and activates, two different types of receptor proteins present in the cells C5aR1 and C5aR2. The C5aR1 is a well-studied receptor, but the working mechanism behind C5aR2 has proved to be more difficult to fully comprehend.

"Using a set of biochemical and structural methods, we have discovered that these so-called "non-functional" receptors, including C5aR2, signal through alternative mechanisms mediated by another type of protein called arrestins," says Dr. Arun K. Shukla, Joy Gill Chair Professor at IIT Kanpur who spearheaded this study in collaboration with researchers at Tohoku University, McGill University and Queensland University. Associate Professor at Tohoku University Dr. Inoue adds, "We distinguished the behaviors of arrestins in C5aR" from those in C5aR1." 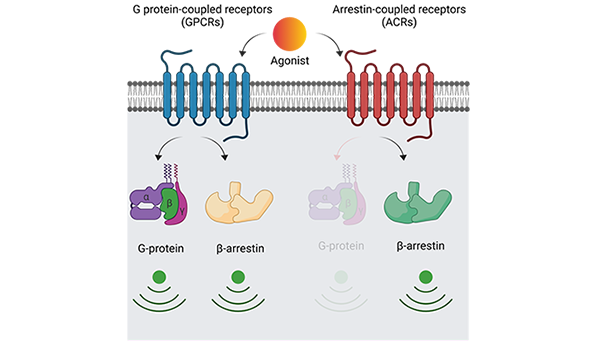 Their breakthrough is pertinent to COVID-19. Scientists have previously found that the activation of the complement cascade in COVID-19 patients leads to the excessive release of small cytokine proteins in the bloodstream - a situation known as a "cytokine storm."
Scientists are trying to block this by targeting C5aR1 with monoclonal antibodies. "Our study offers another means of targeting C5aR2 by designing new drug molecules to block its activation," says Dr. Shukla.

The team is now focusing on visualizing these receptors at atomic details in order to figure out how precisely they differ from the conventional GPCRs, and to identify a novel class of small molecules that can bind these receptors.

The confocal microscopy image shows the localization of C5aR2 (red) with arrestin (green) and their superimposition. The nucleus of the cells is labeled in blue.© Arun K. Shukla

"We are very excited to decipher the finer details of these receptors using cutting-edge technologies such as cryogenic electron microscopy (cryo-EM). Such information should enhance our fundamental knowledge about cellular signaling and allow us to translate our findings into new drug discoveries," adds Dr. Shukla.