Which piece resembles your color perception for #theDress image?

A novel algorithm to simulate the color appearance of objects under chromatic illuminants has been proposed by Ichiro Kuriki of Tohoku University. The figure shows the result of applying this algorithm to #theDress image.

"#theDress image" refers to a photo that went viral on the Internet in February 2015, when viewers disagreed over the colors seen in the dress. The discussion revealed differences in human color perception and prompted studies in vision science.

How do we perceive colors? The details are not yet fully understood even for colors that we easily experience as we open our eyes. This is still one of the fundamental questions about our vision. Objects reflect light from an illuminant on their surfaces. The reflected light yields visual images after entering the eye. The light that falls on the retina changes with an illuminant. However, we scarcely perceive object color shifts. Although slight color shifts remain, the human visual system is able to compensate for illuminant changes. 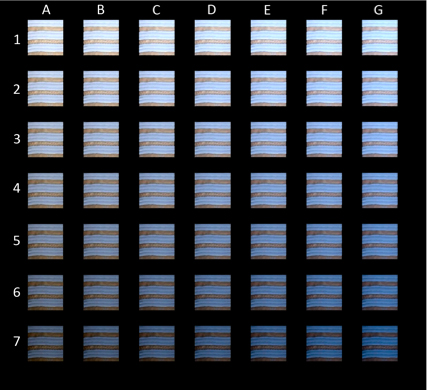 Simulation of individual differences in the appearance of #theDress image, including two extremes: white/gold (top left: A-1) and blue/black (bottom right: G-7). Original corresponds to the center (D-4). 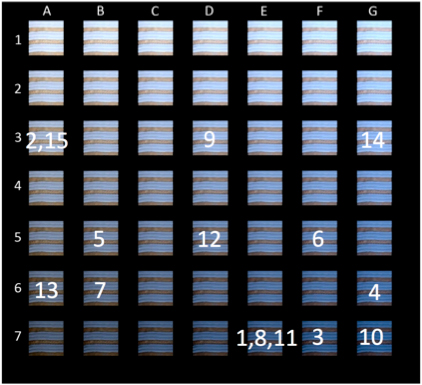 Matched color appearance of 15 observers distributed widely across this chart; not restricted to the diagonal line between A-1 and G-7 as it was assumed in previous studies on the appearance of #theDress image.

Kuriki previously discovered a simple method to approximate these achromatic points under a chromatic illuminant. By combining this with a lightness adjustment, a simple algorithm was proposed to simulate the color appearance under a colored illuminant. The algorithm was applied to #theDress image, widely acknowledged for huge individual differences in color appearance.

Such variability is known to originate from differences in the estimated color and intensity of the illuminant falling on the dress. For example, if a viewer assumed a bluish dim illuminant, the white/gold would be perceived. The color and intensity of illuminant was systematically varied and successfully simulated differences in color appearance of #theDress under various assumptions (Figure); one of these pieces may resemble what you perceive from #theDress image.

The method is also capable of preserving the wider color range of the image at a darker part, even when adjusted for the lightness to simulate a dimmer situation. This is advantageous for high dynamic range displays, which recently became popular as commercial products like OLED screens.