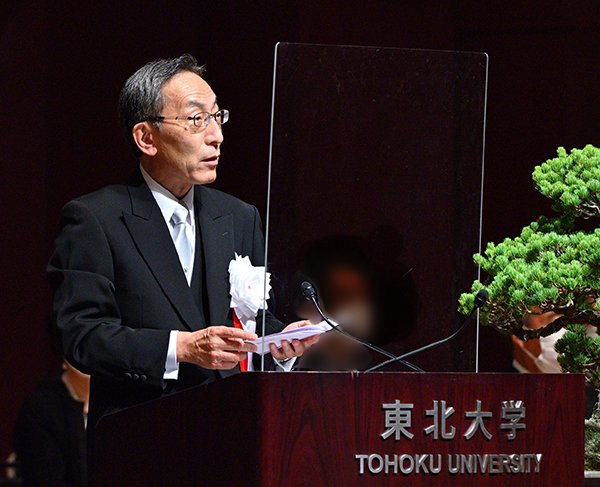 Today is a big day for all of us. You, as graduates, will receive the fruits of your hard work over the past years in the form of a bachelor's, master's, professional or doctoral degree. And for us as university, it is a pleasure and honor to congratulate you and applaud your great efforts and achievements.

We are still partially constrained by the infection prevention measures, but your family and friends are able to join us online through the live stream of the event and be part of this graduation ceremony.

Sendai, as you know, often referred to as the City of Trees, has been the home to Tohoku University since its foundation 115 years ago in 1907. It will also remain your home, as it was to all our graduates in the past, and we will always welcome you when you come back. Of the three principles, "Research First," "Open Doors," and "Practice-Orientated Research and Education," "Open Doors" does not just stand for welcoming people as they are. It is Tohoku University's emphasis on freedom, openness, and equality. We are proud to be a progressive, inclusive university and have been strongly engaged in diversity for over a century.

Tohoku University was Japan's first university to accept three female students in 1913 despite the opposition from the Japanese government at that time. And we were also among the first to admit international students such as Chen Jiangong, who was Japan's first international student to receive a doctoral degree in science in 1929 and later became one of China's leading mathematicians.

Many graduates and members of the Tohoku University community are active in their respective fields and achieved remarkable accomplishments.
The world has become 'global' and 'borderless', and it might even become 'universal' and 'limitless', going beyond the confinements of 'Earth' into 'Space'. Let me introduce some of the activities of the members of our community.

Tomoki Nakamura, Professor of the Graduate School of Science, announced last week that his team found a drop of water in 5.4 grams of stones and dust brought back by Hayabusa-2 from the asteroid Ryugu about 300 million kilometers from the Earth. His team's discovery lends new support to the theory that life may have been seeded from outer space.

Last month in August, Forbes Japan announced the "30 UNDER 30 2022", a list of the country's brightest young entrepreneurs, leaders, and stars, among which were two Tohoku University graduates.
Mina Konaka, a graduate of our School of Engineering, is currently working at the Paris Observatory to pursue her dream of becoming an Astronaut and is among the final applicants to set foot into space. Ryohei Kobayashi, another graduate of our School of Engineering, is involved in research on next-generation space architecture to create a space hotel for which "five stars" will certainly not be enough.

I would also like to introduce two from Africa who have contributed greatly to the country and the region. Selma Sumaya Salima Awumbila, from Ghana, is currently supporting her home community by improving the electric infrastructure. David Chukwuma Izuogy, from Nigeria, has launched the "Africa of Our Dream Initiative" to financially support young talented African students.

Another example to add to this list is Kotaro Isaka, author of the novel "Bullet Train," which is currently being adapted into a movie starring Brad Pitt.

All these activities I mentioned here are to create new social value for the next generation in a future global society. We are all proud to be part of the Tohoku University community they have created.

【Being Part of the Global Community of Tohoku University】

When I visited Singapore last July, I had the opportunity to meet a number of alumni who became government leaders or distinguished researchers of Universities in Singapore. Many expressed their delight and pride over Tohoku University's recent accomplishments, for instance, the three times consecutive number one rank in Times Higher Education's Japan University Rankings.

Like the one I visited in Singapore, our regional branches of our Shuyukai Alumni Association enable us to keep in touch and engage with each other. After graduation, you may step away from the campus in Sendai. Still, it would be our pleasure to keep in touch. And if you do not have a local organization where you will be going, you can always take the initiative and let us know where to establish the next branch of our Shuyukai Office.

You are about to step into an ever-changing world. Many global challenges exist in the contemporary world, like geopolitical conflicts, global warming, poverty, societal inequality, food shortage, energy crisis, and more. These challenges may seem too big to overcome. However, I am fully confident that your time here at Tohoku University will help you make the necessary judgment to manage and overcome these challenges in each field to make the world a better place. As Seymour Martin Lipset, an American sociologist, once said, "Those who only know one country, know no country." Being a graduate of Tohoku University, a globally connected research university, you are already a global citizen. This will take on even greater significance in the remainder of the 21st century, when all of you will be most engaged and active in your endeavors.

Today marks the beginning of a new collaboration between equals. You are all important, valued members of the Tohoku University community. I am looking forward to your outstanding achievements that we all be proud of.
Congratulations on your graduation, all the best for your future, stay safe, and see you again soon.