Afterwards, Yumiko Watanabe, a specially appointed professor at Tohoku University's Global Learning Center, introduced the international student exchange program, whilst the Consulate-General of Japan in Indonesia explained the government scholarships program. Current students and alumni of Tohoku University also gave detailed presentations about scholarship programs and the research environment at the university based on their own experiences. Agni Lili Ariyanti, a student at the Graduate School of Environmental Studies, emphasized self-belief when applying for a scholarship, while Ahmad Ridwan Tresna Nugraha, an alumnus of the Graduate School of Science who works as a researcher in Indonesia, said his academic experience at Tohoku University provided him with unique skills that other researchers in Indonesia do not have.

Participants in the seminar asked how to obtain scholarship information and about life in Japan. At the end of the session, a special raffle was held where participants had the chance to win Tohoku University goods, such as stationery sets and bags. 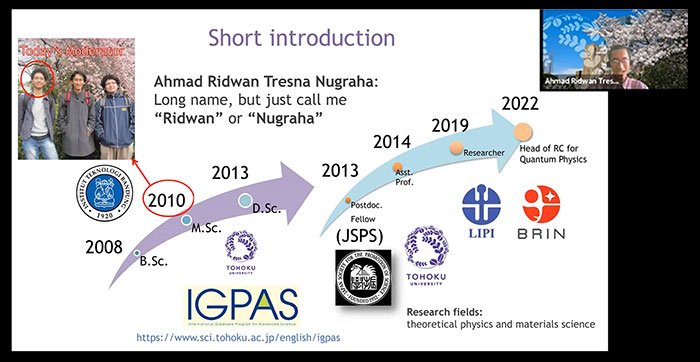